As is often the case with common names for trees and other living things, the names do not reflect their scientific classification. The common names often reflect other concerns. Life isn't all just science and academic research. This discontinuity between common names and scientific names is no better illustrated than in the naming of cedars of North America. You have, no doubt, heard of the cedars of Lebanon and their use in the building of Solomon’s Temple. We are at least familiar with the name, if not the tree. The first Europeans to arrive in North America were likely familiar with the tree, or more to the point, the wood. Cedar wood is known for its fragrance and resistance to rot. Early settlers to the East Coast found trees there that had these same characteristics. So it is perfectly natural that they would call them “cedars.” And from the standpoint of classifying wood uses, it is a perfectly reasonable name.

Now we realize that these North American cedars are unrelated to the cedars of Lebanon. They are not even in the same family. The old world cedars are in the pine family (Pinaceae). The true cedars, that is, those of genus Cedrus, are native to the Himalayas and the Mediterranean region. They include 2 species often planted as ornamentals:

Deodar Cedar (Cedrus deodara) -- native to the western Himalayas. It has 2-inch needles.
Cedar of Lebanon (Cedrus libani) -- native to the mountains of Lebanon, Syria and Turkey. Atlas Cedar, native to the Atlas Mountains in northern Africa is usually considered a subspecies (Cedrus libani subsp. atlantica). The needles of this species are about 1-inch long.
All the true cedars have bundles of needles that grow on short stems, like larch needles. The cones of the cedars look and act like fir cones. They sit upright on the branch and disintegrate as they disperse their winged seeds. Deodar Cedar is a common urban conifer in the Northwest. Cultivars of the cedars are also popular, mostly dwarf-sized varieties that have blue needles. In contrast to the true cedars, all of the cedars of North America are in the cypress family (Cupressaceae). So what should we call them? Some have called our cedars “false cedars,” and tried to distinguish them from the “true” cedars with unconventional typographical notation (“western redcedar” and “incense-cedar.”) However, we must recognize two things: 1) Common names arise from common usage and do not reflect scientific classifications. This a major reason why we have scientific names. 2) You cannot just decide to change common usage. Consider this riddle: If you call a horse’s tail a leg, how many legs does a horse have? Answer: Four. Calling a tail a leg doesn’t make it a leg. When listing the common name for a tree, it’s best to just report the common usage.

Our cedars are not the only trees with this disconnect between common usage and the scientific name. Douglas fir is not a true fir. Wollemi pine is not a pine. Norfolk Island pine? Not a pine. Hemlock trees are not related to the poisonous plant they were named after. So what about our cedars? Several native trees in North America are commonly referred to as cedars. That is their common name. It may be confusing, but it is what it is. For clarification, it is good to give their scientific names and note that they do not belong to the the genus of the true cedars, Cedrus. To distinguish the cedars of North America from the old world cedars, I refer to them as “new world cedars.” This way of distinguishing them has precedent going back to the seventeenth century. In his book New English Canaan, published in 1637, Thomas Morton wrote, “New World Cedars are not true Cedars, but are of the Cypress family….” Although the new world cedars are all members of the Cypress family, they don’t share a common new world cedar genus. In the Pacific Northwest, we have four native cedars and none of them are classified in the same genus. Yet they all have a similar look to them. They have similar looking flat, scale-like leaves that grow down the twig like shingles on a roof. You can easily distinguish the native cedars from other conifers just by looking at these leaves. The branchlets have a similar drooping look in varying degrees. And they are all particularly aromatic, although each has its own distinctive aroma.

How to identify native cedars of the Northwest
In northwest Oregon and western Washington below 2000 feet elevation, any cedar you find is a western red cedar. In the Cascades, it gets more complicated. You will also find Alaska cedar there, and south of Mt. Hood, incense cedar. The other native cedar is Port Orford cedar, which grows in southwest Oregon, especially near its namesake. 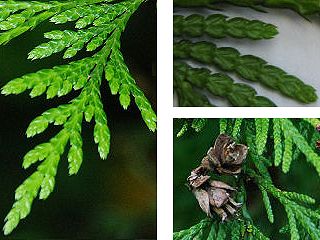 Western red cedar (Thuja plicata) has flat, wide scale-like leaves, often with a white butterfly-shaped pattern on the lower surface. The 1/2-inch cones sit on top of the branch and look like tiny rose buds. The red-brown bark is stringy. 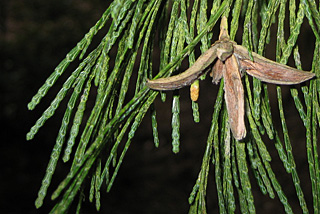 Incense cedar (Calocedrus decurrens) has longer tapered leaves. It has bark that looks similar to western red cedar but is deeply furrowed on large trees. The best way to identify incense cedar is by its unique cones. They are shaped like a duck's bill, and when they mature, they open, showing the open bill with its tongue sticking out. 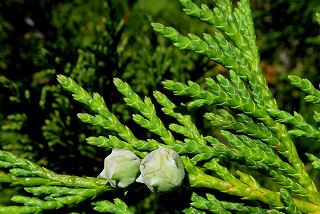 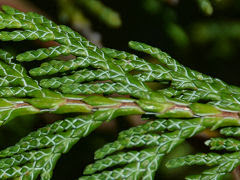 Port Orford cedar (Chamaecyparis lawsoniana) has small round cones like Alaska cedar. The leaves often have a unique, white X pattern on the lower surface.

Did you notice the cedrus embedded in the genus name of incense cedar? Calocedrus means beautiful cedar. Even the scientific name suggests a close relationship to the genus Cedrus. Scientific names can be misleading, too.
Posted by Ken Denniston at 5:18 PM