Searching for giant trees is a favorite past time for many Oregonians. I remember visiting the Klootchy Creek Giant Spruce near Seaside many times. Its size was impressive: over 17 feet in diameter and 200 feet tall. It was once touted as the world's largest Sitka spruce, a distinction it shared with the Quinault Lake Spruce in Washington. Then the Klootchy Creek Giant lost a big piece of its trunk during a windstorm in 2007. In 2011, it was cut down to this large stump that you can visit now without worrying that another piece might fall off.

With the demise of the Klootchy Creek Giant, another Sitka spruce has the distinction of being the largest, at least in the state of Oregon. It is located at Cape Meares at the end of a short trail that starts where Cape Meares Lighthouse Drive meets Bayshore Dr. It's 144 feet tall and 15.5 feet in diameter.

Another notable Sitka spruce at Cape Meares is the Octopus Tree. Its branches were bent when it was younger so that they grew out and then up, forming the shape of an octopus. This was evidently a special meeting place of Tillamook tribal natives. Now it has a massive base with huge limbs reaching out from the trunk before they ascend to over 100 feet. It's located and the end of a short trail that leads up from the parking lot at the lighthouse.

Another impressive Sitka spruce is located near Cape Perpetua south of Yachats. It's not as massive as the one at Cape Meares, but it is taller. It is over 185 feet high and almost 16 feet in diameter. It's located at the end of the Giant Spruce Trail that begins at the Cape Perpetua Visitor Center.

Finally, if you want to see the world champion Sitka spruce, now you will have to drive up the coast of Washington to the south shore of Lake Quinault. It's at the end of a short trail next to Rain Forest Resort Village.

Are you sneezing yet? If so, it's more likely to be from grass pollen than that produced by conifers. Although conifers produce great amounts of pollen, it's generally not as likely to cause allergies as other sources. Pines, in particular, generate great yellow clouds of pollen. But the pollen grains are larger and heavier and less likely to travel far enough to cause allergy problems. On the other hand,  the pollen from the cypress family, especially junipers, cause more allergic reactions. 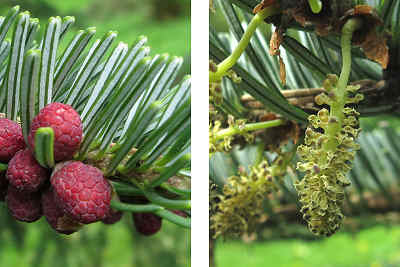 Here is a short update on the development of pollen cones, which I've been following this spring. The photos here show two stages of Pacific Silver Fir (Abies amabilis) pollen cone development. In the first photo, you can see the tiny pollen sacs on each cone. The cones begin to elongate and and the pollen sacs separate along a short stem. Then the pollen sacs dry out and burst open releasing the pollen into the air. The photo on the right shows a cone after pollen release. 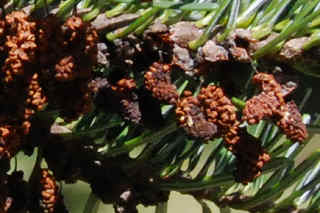 Later, the pollen cones wither and turn brown. They can remain on the tree for a some time, but eventually they fall off. These photos were taken at Hoyt Arboretum in Portland. Since Pacific Silver Firs naturally grow in the higher elevations of the Cascade Mountains, they will be shedding pollen later this spring. 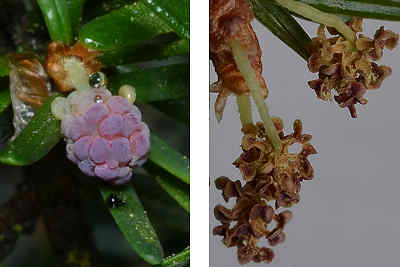 Pollen cones on other conifers develop in a similar way. Here are the pollen cones of Western Hemlock (Tsuga heterophylla), which disperse their pollen in April. These trees grow at lower elevations in the Northwest. If you are allergic to pollen and start sneezing as you hike the trails of Portland's Forest Park, these won't be the culprits. The only native conifer there with allergenic pollen is Western Red Cedar Thuja plicata.
Posted by Ken Denniston at 6:21 PM 2 comments: