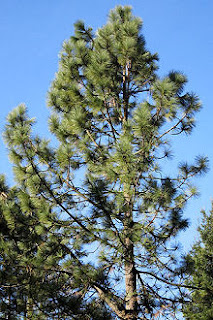 You’re probably familiar with ponderosa pine. It is the iconic tree of the western U.S., easily recognized by its distinctive, puzzle-piece, orange bark. Its cones are also distinctive, egg shaped, 3 to 6 inches long, and notoriously armed with painful prickles. However, if you travel to southwest Oregon, you may find what looks like a ponderosa pine with cones that are twice the size of ponderosa cones. They may be as large as 10 inches long. Congratulations, you have just discovered a Jeffrey pine. 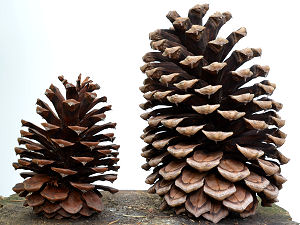 It's no surprise that Jeffrey pine is a relative of ponderosa pine. Except for the cone size they are often difficult to tell apart. The size isn’t the only difference in the cones. Both have sharp prickles on the scales, but the prickles on Jeffrey cones point inward when open, while Ponderosa prickles generally point outward, just waiting for an unsuspecting hiker to pick up the cone. This difference in prickle orientation has been noted by some as a telltale difference between the two with this mnemonic device: Prickly ponderosa, Gentle Jeffery. However, this is not a reliable distinction. The prickles on both trees are variable. But here’s a better distinction: 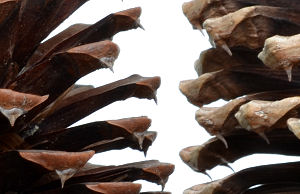 The prickles on ponderosa are short and curved, while the prickles on Jeffery are longer and straight. Note that if you are impaled by a Jeffery prickle, you may find that your finger is trapped by the prickle and the scale below! It’s very painful and difficult to remove.

The cones open when ripe and drop the large, winged seeds. They aren’t likely to fly very far, but they are a favorite food of the Clark’s nutcracker, Steller’s jay, squirrels, and chipmunks. They will eat them or cache them for eating later. Not all cached seeds are needed or remembered, so seeds that are cached in the soil often become the next generation of Jeffrey pines.

Jeffrey pine grows throughout the Sierra Nevada Mountains of California. Like many conifer species that are native to California, the range of Jeffrey pine crosses the border to a few locations in southwest Oregon. For example, you can find them growing along Interstate 5 north of Grants Pass and along Highway 199 near Cave Junction.

Jeffrey pine often grows in nutrient-poor soils where other species cannot grow. Does this mean that it thrives in these conditions? Not so much, but it does better than competing species. Jeffrey pine is smaller than ponderosa pine, growing to 130 feet or more. 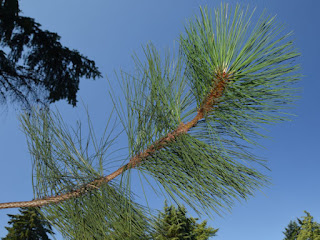 For example, note this curious branch on a ponderosa pine in my yard. It looks like it did well some years and the needles remain, while the needles are missing from other years.

Jeffrey pine bark looks similar to ponderosa pine with flat plates shaped like the pieces of a jigsaw puzzle. But Jeffrey pine bark is brown rather than orange. However, the bark on ponderosa pine can also look very much like Jeffery pine bark, especially on ponderosas growing in the Willamette Valley.  The bark is variously described as smelling like vanilla, lemon, or pineapple. But ponderosa bark can smell like lemon, so smelling bark may not be a good way to identify them.
Jeffrey pine was named after Scottish botanist John Jeffrey, who discovered it in1852 growing in the Shasta Valley in California. Other common names: western yellow pine and bull pine.

**OSHAreports 10 people injured or killed by explosions or fires since 1988.

Posted by Ken Denniston at 3:18 PM No comments: