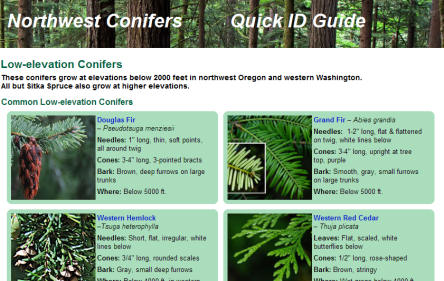 New at nwconifers.com: Have you always wanted a tree guide that you could take with you in the woods? I've made a Northwest Conifer Quick ID Guide that you can print and put in your pocket. You can download a PDF or Word version here: http://nwconifers.com/info/quick.htm
Posted by Ken Denniston at 3:03 PM No comments:

Treebeard is Fangorn, the guardian of the forest; he is the oldest of the Ents, the oldest living thing that still walks beneath the Sun upon this Middle-earth.
The Two Towers, J. R. R. Tolkien


As noted in the Ancient Trees post, conifers have ancient origins. But conifers are not only ancient in the evolution of trees, they are also the oldest living trees, surviving for thousands of years. Several species of pine, cypress, and yew are among the oldest trees.
Yews Yews can live to be quite old. The oldest known yew is an English yew (taxus baccata) growing in Fortingall, a village in Scotland. Most of the large trunk of the tree is missing, so it's impossible to count tree rings to determine its age, which is estimated to be 1500 to 3000 years old. Redwood Most sources list the oldest redwood (Sequoia sempervirens) as over 2200 years old. However, scientists recently found a living redwood that they determined to be 2520 years old. The world's tallest tree is a 379-ft. redwood called "Hyperion," discovered in 2006 in Redwood National Park. The oldest and tallest redwoods are in California, but they also grow in a few groves in the southwest corner of Oregon. Giant Sequoia The oldest giant sequoia (Sequoiadendron giganteum), called “The President", is 3200 years old. It is located in the Giant Forest in Sequoia National Park. A giant sequoia is also the largest tree in the world. It is General Sherman, located in Giant Forest Grove in Kings Canyon National Park. Coincidentally, the largest giant sequoia in Oregon is in downtown Forest Grove. It is one of many giant sequoias planted in Washington County in the mid 1800’s.

Some lists of the oldest trees credit a Norway spruce (Picea abies) growing in Sweden as the oldest living tree. At a reported 9950 years old, this tree is nearly twice the age of the oldest bristlecone pine. But this spruce is a “clonal colony,” that is, a colony of clones of a single ancient ancestor. No single part of the colony is 9950 years old. And as clonal colonies go, this spruce is just a youngster. A clonal colony of quaking aspen in Utah is estimated to be 80,000 years old. This amazing colony covers 106 acres and has over 40,000 tree trunks. However, the oldest of the trees in the colony are only about 130 years old.

The oldest tree in Oregon may be a limber pine (Pinus flexilis) located in the Wallowa Mountains in the northeast corner of the state. Tree rings in the outer 10 inches of the tree date back to the year 1141, but the remaining 20 inches is rotten. The tree is clearly much older than the rings indicate, probably well over 2000 years old. You can view a story on Oregon Field Guide about the tree here:
http://www.opb.org/television/programs/ofg/segment/old-tree/

Posted by Ken Denniston at 10:10 PM No comments:

Conifers have a long history, dating back nearly 300 million years at the end of the Carboniferous Age. But just when life appeared to be going great for conifers, disaster struck in the mother of all extinctions 250 million years ago. Few conifers survived. In fact, none of the conifer families from that time survive to this day. But the conifers that did survive adapted and soon flourished. Conifers ruled the earth for millions of years before the arrival of flowering plants. During the heyday of the conifers, 20,000 species covered the earth, compared to the mere 600 living today. Some of the conifer families of our time have very ancient origins.

Podocarp Family (Scientific name: Podocarpaceae.)
This is an ancient conifer family. The first Podocarps arose 240 million years ago and include 173 living species. The Tasmanian podocarp (Podocarpus alpinus) is native to Australia. Podocarpus, comes from the Greek podos (foot) and karpos (fruit). The cone has a fleshy, berry-like scale with a single seed, similar to those on yew trees.

The Araucaria family (Araucariaceae) The Araucaria family dates to 220 million years ago. Now about 40 species, it is found in the southern hemisphere, mostly in tropical rain forests. The monkey puzzle tree (Araucaria araucana) grows in the southern Andes. The unique, pointed leaves are quite prickly. The monkey puzzle tree is fire resistant and has edible nuts. It grows to 130 feet. Some trees are 2000 years old. You can find many large monkey puzzle trees growing around Portland. They originated from seedlings that were available at the World's Fair in Portland in 1905.

Although Oregon is young geologically, the ancestors of our native conifers are quite ancient. Conifer families native to Oregon include the Pine, Cypress, and Yew families.

The Dawn Redwood (Metasequoia gliptostroboides): Sequoia-like fossils have been found all over North America and Europe. The fossils were classified as Metasequoia in 1941. Metasequoia was widely described as a "living fossil" after living specimens were discovered and collected in China in 1943. Hoyt Arboretum received seeds in 1948. One of the trees grown from these seeds was the first dawn redwood to produce cones outside of China in over 6 million years. Metasequoia fossils are abundant at the John Day Fossil Beds, where they commonly grew 30 million years ago. The Oregon legislature designated Metasequoia as the Oregon State Fossil in 2005.

Yews date to 175 million years ago, the most ancient of our native trees. The family now includes 28 species, mostly in the northern hemisphere. Oregon’s native yew is the Pacific yew (Taxus brevifolia). Taxol derived from the bark of this tree was used to treat cancer in the 1990’s. This rare tree would be endangered today, but researchers found a way to synthesize taxol from more common yews.

Maidenhair Tree (Scientific name: Ginkgo biloba)
The maidenhair tree is an unusual tree that is even more ancient than any of the living conifer families. Ginkgo-like fossils date to 270 million years ago. Modern Ginkgos are native to China, but have been widely planted wherever the climate is temperate or tropical.
If you compare the unique leaves to the leaves of the maidenhair fern, you can see why it’s called the maidenhair tree. Pollen and seeds are produced on separate trees. Since the female trees produce seeds with a soft, foul-smelling outer layer, most planted ginkgos are male. Since Ginkgos are deciduous with broad, flat leaves, you might expect that they are related to other broad-leaf trees, but this is not the case. Ginkgos are more closely related to the conifers.

____________
Notes
* Douglas fir is not a true fir. That is, it is not a member of the Abies genus. It is classified in another genus: Pseudotsuga.
**The cedars of North America are not true cedars. That is, they are not members of the Cedrus genus. The true cedars are native to the Mediterranean area and the Himalayas.