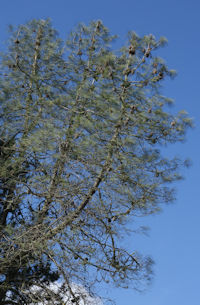 I was at the Portland Chapter meeting of the Native Plant Society recently and someone there told me that the gray pine (Pinus sabiniana) was an native. This was news to me. It’s not listed in Trees to Know in Oregon, from the Oregon State University Extension Service. Also, Ronald Lanner writes in Conifers of California that gray pine is “…a native to alone – without any or outliers.” (p. 71) He goes on to quote David Douglas on the discovery of the gray pine: “I have added a most interesting species to the genus Pinus, P. sabinii, one which I had first discovered in 1826, and lost, together with the rough notes, in crossing a rapid stream.” However, David Douglas was not in in 1826. He was in the area of in search of sugar pine, where he must have also seen some gray pine. The “rapid stream” he crossed was the .

Frank Callahan documents the discovery of the gray pine in . He reports that a railroad survey in 1855 recorded them growing in between Gold Hill and Central Point. In 1945, Oliver Matthews provided the first scientific documentation of Pinus sabiniana in after collecting specimens near Gold Hill. Callahan notes numerous specimens that he has located in the area.  (See Frank Callahan, “Discovering Gray Pine (Pinus sabiniana) in Oregon,” Kalmiopsis Volume 16, 2009. 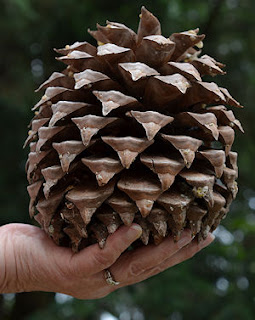 The gray pine is a distinctive pine with long, gray-green needles. Its most distinctive feature is the size of its large, heavy cones. They are usually visible it the top branches of the tree, where they remain for several years after they mature. The cones have the largest seeds of any conifer in the . The nutritional seeds were harvested by Native Americans, although too few trees grew in for them to be an important food source. Since the seeds are too large to be dispersed far from the tree, the gray pine relies on birds to disperse the seeds. Gray pine seeds are a favorite food of the Steller’s jay and scrub jay, which store seeds in the ground to eat later. Since the jays never recover all the seeds, they also plant the next generation of gray pines.