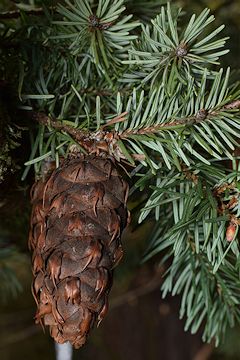 The Douglas fir is an extraordinary tree. It is the state tree of Oregon and the most common tree in the Pacific Northwest. But to call it “common” belies its uniqueness. It is quite distinct from the true fir trees and quite unlike any other conifer genus. Its unique cones with their three-pointed bracts distinguish it from other trees. The thick, deeply-furrowed bark sets it apart from other northwest conifers. And its soft, bottle-brush needles and long pointed buds make it easy to distinguish from all the other conifers of the region. 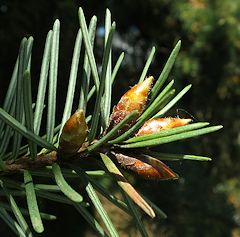 The unique features of Douglas fir presented a puzzle to botanists for years. It has been called a pine, hemlock and spruce. Its scientific name changed 21 times as botanists attempted to determine how to classify the species. Although it has blisters in its young bark like the true firs, in many other respects it is quite unlike the firs. The cones look and behave more like hemlock or spruce cones than fir cones. But the three-pointed bracts on the cones and the thick bark clearly distinguish it from the hemlocks and spruces. In 1867, it was classified not as a fir, hemlock or spruce, but in a separate genus of its own, Pseudotsuga. Finally, after many more years of discussion and confusion, Pseudotsuga menziesii was adopted as the species name in 1953.

The first Pseudotsuga evolved in northern Mexico about 50 million years ago. Douglas fir is closely related to the larch genus, which evolved from the pines. Douglas fir either branched from the same pine ancestors or from the larch. In either case, the two took quite different evolutionary paths, the larch becoming deciduous with bundles of needles, and Douglas fir growing evergreen needles that resemble those of the spruce.
After its departure from the larch, Douglas fir began a long journey north, with some branching off to southern California to a separate species that we now know as bigcone Douglas fir (Pseudotsuga macrocarpa). As the name implies, they have larger cones than the Douglas firs of the Northwest, although the trees are usually much smaller. Meanwhile, the trees that continued their migration to the Pacific Northwest became what we know as Douglas fir. It may seem odd to speak of trees migrating. They generally stay rooted in one spot. Yet even though the trees themselves don’t travel, their winged seeds do. When the cones ripen and open, they release seeds that flutter to the ground like tiny helicopters. Let’s just suppose that in 100 years a tree grows to be 100 feet tall and produces seeds the are blown 100 feet from the tree. Thus, the forest will move 100 feet in 100 years, or on average, a foot per year. At that rate, it would take about 5000 years to migrate one mile. It may seem impossible for this forest to migrate all the way to Oregon, until you consider that it had 50 million years to make the trip. At the conservative rate of one mile every 5000 years, these seemingly steadfast trees could travel 10,000 miles. And that is exactly what they did. Not content to linger in Oregon and Washington, they continued right up the Pacific Coast to Alaska and across the land bridge to Asia and all the way to south-central China. Along the way changing conditions led to several distinct species now growing in China and Japan.
Meanwhile back in the Pacific Northwest, Douglas firs have adapted to different conditions here. As they did so, they branched into two varieties:
Douglas fir is historically a fire-dependent species. Since it is not shade tolerant, it depends on fire or some other disturbance that opens up the canopy and leaves bare soil for its seeds to germinate. Once established, Douglas fir can dominate a stand of forest for several hundred years. Its thick bark helps it resist fires that often kill other conifers. Barring another disturbance, shade-tolerant trees such as western hemlock growing in the understory will eventually become dominant. Douglas fir is widely planted in many locations around the world, where it is grown for timber. Europe has more stands of Douglas fir than any other introduced species. The species has also been planted in a number of locations in the Southern Hemisphere, most notably in New Zealand, where it is sometimes considered to be invasive.

Discovery and Names
Archibald Menzies introduced Douglas fir to the scientific world when he found it growing on Vancouver Island and retrieved specimens in 1791. Menzies didn't collect any seeds or cones, but David Douglas collected Douglas fir seeds in 1826. These seeds introduced the cultivation of Douglas fir in England. Douglas is honored in the common name for Douglas fir. Menzies is honored by the scientific name, menziesii. The genus name, Pseudotsuga, means "false hemlock." Botanists often write the common name as "Douglas-fir" to indicate that it is not a true fir. Other common names: Oregon pine, red fir, and red spruce.

Old Giants
Coastal Douglas firs can live to be 1300 years old, and commonly reach an age of 750 years. The oldest tree on record grew near Mount Vernon, Washington. It was about 1400 years old when it was cut down in 1913. The tallest tree in the world is a redwood that is 379 feet tall. But a Douglas fir that was cut down in 1902 near Vancouver, British Columbia measured 415 feet tall. Another tree cut down in Whatcom County in Washington in 1897 was reported to be 465 feet tall. The tallest living Douglas fir is a 327-foot tree growing in Coos County, taller than any conifer in the world except for the California redwoods. Another notable Douglas fir is the Big Tree at the Oregon Caves National Monument. It is 13 feet in diameter, but only 160 feet tall. You can find some fairly large Douglas firs in Portland's Forest Park, the largest next to the Stone House at mile 5.5 on the Wildwood Trail.

Uses Douglas fir is the Northwest's most important timber tree. Its strength makes it ideally suited for structural timbers and framing lumber in home construction, and its fast growth make it a favorite of foresters. If you live in a wood-framed house, it was very likely built from Douglas fir lumber. The species is also a popular Christmas tree, mostly because it is typically less expensive than other species.

Standing Douglas fir trees also provide a home for many animals and birds. Many cavity-nesting birds nest in Douglas fir snags. The red tree vole lives in mature Douglas fir trees, usually spending its entire life in a single tree, where it feeds primarily on the needles, and builds a nest high in the tree. Several individuals often inhabit a single tree. The red tree vole is a major food source for the spotted owl, which also nests in mature Douglas fir forests. The marbled murrelet is a sea bird that nests on large limbs of old Douglas firs.
After Douglas fir cones open and disperse their seeds in the fall, small mammals and birds eat most of the seeds. While the chipmunks and mice compete for these seeds, one notable denizen of Douglas fir forests takes its seed consumption to a higher level. This enthusiastic consumer of Douglas fir seeds is the Douglas squirrel. These squirrels harvest the cones before the seeds are dispersed. One will cut off a nearly ripe cone, scramble to a favorite branch, deftly cut away the cone scales and eat the seeds in a matter of five minutes. You can often find the results of this orgy in large piles of the scales and cone cores or what I call “cone cobs.” But the Douglas squirrel is not just a seasonal consumer of Douglas fir seeds. It will cut down quantities of cones and cache them in a wet place on the ground for winter consumption. If you listen carefully, you may hear the distinctive call from a squirrel high in the tree claiming ownership of cones, tree, and forest.
Since Douglas fir trees are so ubiquitous in the Northwest, you will have no trouble finding them whenever you hike in the woods. Look for the thick bark and check on the ground for cones with three-pointed bracts. And listen for the sharp call of the Douglas squirrel. They may have no title or deed, but they know that the forest belongs to them.