When I picture a ponderosa pine, it is growing in central near , or at the east end of the Columbia Gorge near . I remember these stately trees fondly, especially their distinctive, brightly colored bark. I missed seeing them after moving to the area from . However, it was a surprise to me to learn recently that ponderosa pine is also native to ’s . The ponderosas of the are adapted to the wet conditions found west of the . Even more surprising, these natives are better adapted to wet areas than the firs that grow in the valley. I remember that we had two large ponderosas growing next to a creek on the farm where I grew up northwest of . Although I didn’t know a ponderosa from a pond-lily at the time, I remember the distinctive look of these trees.


The ponderosa pines that grow west of the Cascades and on the west slopes of the Sierras in have been classified as a separate subspecies, sometimes called “Pacific ponderosa pine” (scientific name: Pinus ponderosa subspecies benthamiana). Those that have adapted to the wet conditions of the are often called “ ponderosa pine.” Studies of ancient pollen show that these pines have been present in the for over 7,000 years.

Before European settlement in the 1850’s, ponderosas grew in scattered locations in wet, boggy areas along with ash, and on hillsides with white oak or Douglas fir. Like the ponderosas east of the Cascade Mountains, the natives depend on frequent fires to eliminate competing conifers. These naturally occurring fires would burn up the grasses, shrubs and other competing conifers like Douglas fir and grand fir. But the thick bark on the ponderosas enabled them to survive these fires. The earliest inhabitants of the understood this and used it to their advantage, setting fires to clear brush and other conifers. This maintained open ponderosa woodlands good for hunting. The European settlement of the changed all that. These newcomers cut down the trees for lumber and other uses, turning the woodlands in the valley into farmland. It wasn’t long before there were few ponderosas growing in the .

researchers wanted to see if they could restore ponderosas to the . Plantings of east-side and west-side ponderosas on a test site near determined that the east-side trees did not grow well in this wet environment. Any successful restoration would have to use seeds of ponderosas native to the valley. In the 1990’s researchers began collecting seeds from various locations and growing trees in a seed orchard near . The seed orchard has provided seeds for planting in parks and other locations where the trees can thrive. 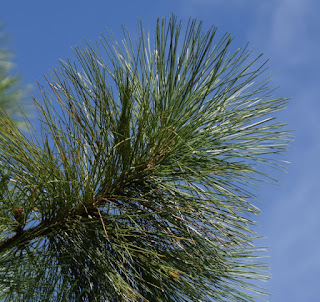 Ponderosa pines generally have long needles that grow in bundles of three. You can identify the variety by the length of the needles. If they are 10 to 12 inches long, the tree is likely native to the . The ponderosas growing east of the Cascades have needles that are no longer than about 10 inches. However, the key to finding some of the ponderosas is just knowing where they are growing.


The best location I’ve found for mature ponderosa pines is the in . There are large ponderosas scattered here and there all over the park. Just look for the long needles on the trail and then look up. You’ll likely see a large ponderosa. Some smaller ones are growing next to the parking lot. ponderosa pines have been planted in many other parks in the area. For example, and the Tualatin River National Wildlife Refuge have plantings of natives. The at the in Silverton has a section of ponderosa pine. These were planted in neat rows in 2002. For comparison, some east-side ponderosas are planted next to them. Nearby, more ponderosas were planted with Oregon white oak, showing how these trees grew together 150 years ago forming a pine-oak savannah.

On a recent hike at south of Forest Grove, I was surprised to see a few ponderosas growing along the trail. Keep your eyes open when you are hiking on local trails in the . You may see a ponderosa pine. If the bark doesn’t have the bright colors of the ponderosas east of the Cascades, be patient. This only appears on very old trees. Enjoy these stately trees as they grow older. You may see the brightly colored bark in about 75 years.