I had the great opportunity to visit the east of this summer. The HJ Andrews Experimental Forest is a 16,000-acre ecological research site, supported by and the US Forest Service. 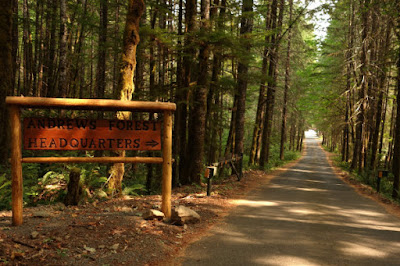 The was established in 1948. In the 1950’s, the research focused on increasing the “efficiency of forest operations.” At that time, forestry was viewed as a form of farming. Just as the corn farmer grows crop after crop of corn, the forester grows crop after crop of trees. The question was: How do we use science to maximize the tree harvest? Of course, natural forests in the didn’t grow as crops. The trees here grew to be large and old. But what about these old-growth forests? They were considered very inefficient, in fact worse than inefficient, producing no new logs. First they needed to be cut down. Then efficient tree farming could begin. The process was:  Plant new trees, usually Douglas fir, grow them for 60 years, harvest them by clear cutting, repeat. This was the new “scientific” approach to forestry, which at least replaced the devastating cut and run forestry that removed forests all across the country, starting at the East Coast. Still, this new approach to forestry was focused on maximizing timber production.

However, the researchers at the also began to study the workings of a naturally growing forest. It is as if they had just discovered something that Henry David Thoreau had written 100 years earlier: “Would it not be well to consult with Nature in the Outset? For she is the most extensive and experienced planter of us all” (from “The Succession of Forest Trees.”) It is this focus on how a natural forest grows and how the various organisms interact, grow, and change over time that has occupied the scientists at the . This new research has led to some amazing discoveries and a new understanding of how to manage a forest ecosystem.

Jon Luoma’s wonderful book, The Hidden Forest, tells the story of the research at the . Some of the most interesting research reveals how different species in the forest work together for mutual benefit, an arrangement called symbiosis. Here are some fascinating examples.

All plants need nitrogen to thrive. A young forest gets nitrogen from nitrogen fixing shrubs. Red alder trees, which often are the first trees to grow in a new forest also have nitrogen fixing bacteria in their roots. However, as a forest matures, conifers grow to shade out the shrubs and even the alders. By the time the forest becomes mature, all these nitrogen fixers are gone. So, where does a mature forest get the nitrogen it needs? This mystified scientists for a long time. They didn’t find the answer until a team at the used ropes to climb into the top of a Douglas fir tree. What they found 200 feet above the ground was an abundance of lichen growing on the branches. The lichen they found is lettuce lichen (Lobaria oregana). Testing showed that this lichen was full of nitrogen. Much of the lichen eventually falls to the forest floor allowing the nitrogen to enrich the soil. Without the lichen, an old-growth forest probably could not exist. In return, the lichen doesn’t ask for much, just a place to live up in the abundant sunlight of the forest canopy.

Lichens themselves are an interesting study in symbiosis. A lichen is not a single organism. It is a composite organism made of algae and fungi living in a symbiotic relationship. The algae perform photosynthesis and supply energy to the lichen. Threads of fungi provide structure keeping it all together, gather water and nutrients, and attach to the tree where the lichen grows. 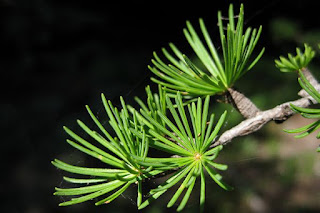 Another fascinating discovery was finding fungi living inside apparently healthy conifer needles. Why didn’t the fungi harm the needles, and just what were the fungi doing there? Well, trees have a problem with defoliating insects. Unlike short-lived plants, trees live too long to react to evolving short-lived insects. It turns out that these fungi have a symbiotic relationship with the needles. In exchange for the energy supplied by the needles, the fungi protect the needles by creating compounds that poison the defoliators. If the defoliators develop a resistance to the poison, the short-lived fungi can quickly change to create new, effective poisons. It’s a constant evolutionary race, not unlike the race between new strains of disease and the pharmaceutical companies that must create new forms of antibiotics, although the fungi don’t make billions of dollars for their services.

Over 100 years ago, scientists discovered another symbiotic relationship 200 feet below in the root systems of the trees. While researching how to grow truffles, a scientist discovered that threadlike tendrils attached to the truffles were connected to the roots of trees and other plants. These are the fungi that produce the truffles. He also discovered that seedlings with these fungal connections grew much faster. Now we know that these fungi get nourishment from the tree. In return, the fungi collect water and minerals that feed the root system of the tree.

In the 1970’s scientists at the discovered more remarkable connections in the ecology of the forest, not just between the fungi and trees, but also between the fungi and small mammals. Voles, chipmunks, squirrels, and mice, love truffles and other fungi. For some, it is an important part of their diet. It’s no surprise that squirrel poop is chocked full of the reproductive spores from the fungi, which, of course, these small mammals distribute all over the forest making their own little contributions to the forest ecosystem. In their turn, the trees provide habitat for the mammals both when the trees are alive and especially when they’re rotting on the ground. Voles, for example, depend on these rotting logs. The rotting logs, then, become an essential part of the forest ecosystem, not just providing living quarters for the voles, but food for insects and other organisms as well. Eventually, nutrients in the log are recycled back into the soil. These factors have led researchers at the to re-assess the old forest practices of clear-cutting and removing the dead material from the forest floor.

These and other discoveries at the led to a new approach to forest management based on their studies of naturally growing forests. If Thoreau were alive today, he would say, “Well, it only took you 100 years to figure that out.”
The two-day workshop I attended at the was hosted by the Oregon Season Tracker Program, a joint project of the OSU Extension program and the . The Oregon Season Tracker Program enlists volunteer citizen scientists to collect and record precipitation and plant phenology data. Daily precipitation is easy to record using a standard rain gauge like the one above. We report the precipitation to the CoCoRaHS Web site.


Posted by Ken Denniston at 8:56 PM No comments: