Pacific silver fir is a high-elevation tree that can reach a height of 200 feet (60 meters). At the timberline where winters are cold and the snow is deep, silver fir grows closer to the ground where the snow can protect it from the wind and cold. If you venture there in the winter, you will notice that the dark green needles look nearly black in the winter whiteness.

Although it is generally easy to identify our native conifers, the firs can be tricky. However, Pacific silver fir isn’t closely related to other native firs and doesn’t hybridize with any of them. It is easy to distinguish this fir from other high-elevation firs by its needles and unique bark. 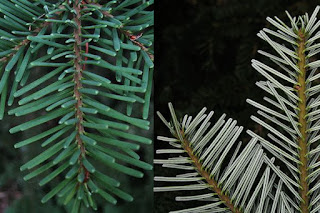 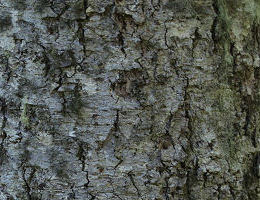 Young bark is gray and smooth with resin blisters. Older bark breaks into gray, scaly plates. These large irregular plates are unique to Pacific silver fir, distinguishing it from the furrowed bark on other native firs. 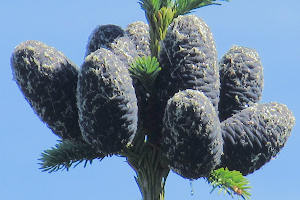 The cones sit upright on the branch and turn from green to purple. Like other firs, the cones fall apart at maturity, leaving a cone core spike on the branch. Pacific silver cones are much larger than grand fir or subalpine fir, but much smaller than noble fir. The immature pollen cones look like delicious tiny raspberries, but certainly are not edible.


Pacific silver fir grows at higher elevations in the Cascades, the Olympic Mountains, and a few locations in the Coast Range in Oregon and Washington. On the Olympic Peninsula and north to southeast Alaska, it grows down to sea level. It often grows in pure stands of large trees and sometimes near the timberline, mixed with subalpine fir and mountain hemlock.


Like grand fir, Pacific silver fir is more shade tolerant than our other native firs. You can find it growing in the understory in stands of towering mountain hemlock, for example, on the trail between Mount Hood Meadows and the Timberline Trail. Pure stands of Pacific silver fir grow in the Badger Creek Wilderness near Flag Point on the Tygh Creek Trail.

Native people used the boughs for floor bedding, chewed the pitch as gum, and used the wood for firewood. Like hemlock and most other firs, the wood is not generally regarded as high quality. Construction lumber from these trees is sold as “hem-fir.” It’s not as strong as Douglas fir, but it has some honorable uses. Many moldings are made from these species. The wood is soft, doesn’t split when nailed, and stains nicely. More commonly these trees are made into plywood, perhaps an acceptable fate, or suffer the final indignity of being made into paper.

The common name reflects the color of the lower surface of the needles and the silvery bark. The scientific name is Abies amabilis. Scottish botanist David Douglas named it Picea amabilis when he found it growing near the Columbia River. It was later classified as Abies, but kept its species name, amabilis, which means "lovely." Other common names: White fir, red fir, lovely fir, amabilis fir, and Cascades fir. 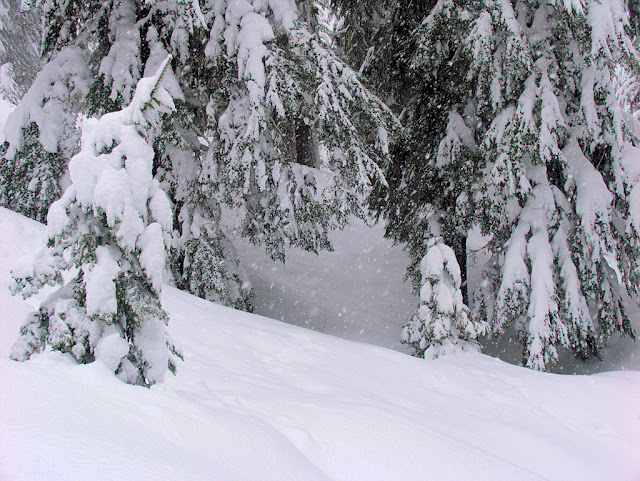 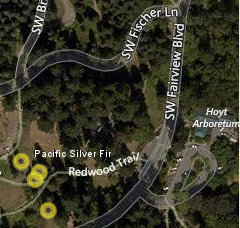 Unless you like snowy winter sports, you won’t see any Pacific silver fir until next summer. But if you can’t wait, you can see some planted just west of the Visitor Center at Hoyt Arboretum in Portland. 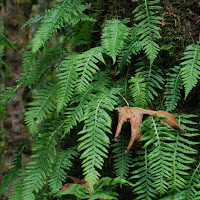 If you go out in the woods today, you're in for a big surprise: Licorice ferns are having a picnic. These hardy ferns thrive at this time of year. I'm calling them Christmas ferns. I realize that ferns are not conifers. The licorice fern does not even associate with conifers. It does grow on trees, but avoids conifers. Its favorite place to grow is on the bigleaf maple trees, not even a distant cousin of conifers. However, this fern is such a fascinating native of our local forests that it deserves some special mention here, particularly at this time of year.

Unlike most of our native ferns, which thrive in the spring and summer and die down in the winter, the licorice fern thrives at this time of year when the winter rains come. You can see it growing on the trunks and limbs of bigleaf maples. Besides growing on maples, on occasion, it grows on other trees, for example red alder and Oregon white oak. It often appears in the ground next to the trees where it grows. It also grows on logs and rocks, sometimes rocks in the middle of streams. But there is one thing all these tree and rock locations have in common: They are all covered in lush mats of moss. This is what explains the unconventional life-style of the licorice fern. The ferns anchor to the tree with roots growing in a layer of soil-like dead moss. The ferns obtain nutrients from this soil. Most importantly, the moss acts as a sponge, collecting rain water that is essential to the ferns. 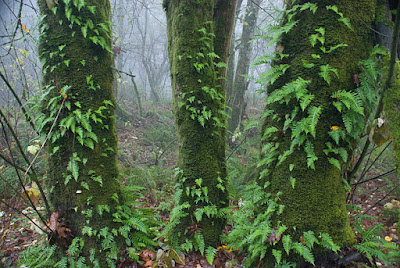 When the moss dries out in the summer, the ferns dry up, too. A summer rain will bring the dried ferns back to life. However, if the dry period lasts too long, the fronds of the ferns will die and fall off. When rain returns, the ferns sprout new fronds from the roots in the moss and grow throughout the wet winter, as long as temperatures stay above freezing. This out-of-phase growth pattern has prompted some to describe licorice fern as “summer-deciduous.” 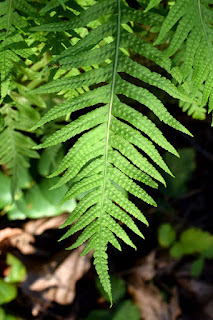 The unusual growth habit of licorice fern may also explain why it grows on maple trees and not conifers. Although it is moderately shade-tolerant, licorice fern does need sunlight. And since the fern grows in the winter, it needs sunlight at that time of year. But most conifers keep their leaves in the winter. When the deciduous maples lose their leaves in the fall, plenty of winter sun can reach the ferns growing on them. However, the dark understory below conifers is not a friendly place for licorice ferns.


Identification: The easiest way to identify licorice fern is to look for moss growing on a bigleaf maple. If there are ferns growing in it, they are licorice ferns. Conversely, in winter after the leaves have fallen, the easiest way to identify bigleaf maple is to look for licorice ferns. They are likely to be growing on a bigleaf maple, although there’s a chance it could be an alder or oak… or a rock. You can also identify licorice fern by its unique characteristics. It grows on stems that are light green or straw colored, not black like oak fern or some deer fern. A single, non-branching stem grows from each location, while many other ferns have multiple fronds growing from one central location. The leaflets on opposite sides of the stem are staggered rather than directly opposed. Where each leaflet attaches to the stem, it spreads to the next leaflet, rather than attaching at a point like sword fern.

Names: The scientific name of licorice fern is Polypodium glycyrrhiza. The genus name, Polypodium, means many-footed, a reference to the way the stems attach along the root or rhizome. If you look inside the moss where the ferns are growing, you will discover the stems attached to a rhizome that is about the diameter of a pencil. I don’t know the Latin for many legged, but that might better describe these ferns, which have multiple stems attached along one root (foot). The species name, glycyrrhiza, comes from Greek and means sweet root.

Why is this fern called “licorice fern?” If you taste a piece of the root, you may find that it tastes like licorice. It definitely has an interesting, sweet taste. Native Americans chewed the roots and used them to sweeten other foods. They also used them to treat a cough and other illnesses.


Finally, here’s one more fascinating detail about this mossy-fern ecosystem. Living in a symbiotic relationship with the licorice fern roots, mycorrhizal fungi perform the same task as those found living with the roots of conifers. They help gather water and nutrients. In return the fern supplies the fungi with the sugars it makes through photosynthesis. It’s a microcosm of the larger forest ecosystem.

Pay special attention to these hardy denizens of winter when you hike in the woods. Another apt name for licorice fern would be winter fern, or even Christmas fern.