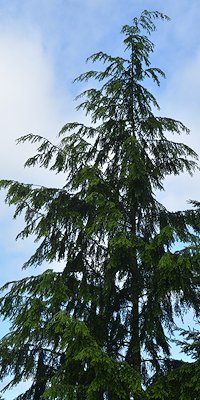 Western hemlock (Tsuga heterophylla) is one of the most delicate and beautiful conifers of the Pacific Northwest. For all its beauty, the hemlock is a humble tree. While the firs and spruces point their rigid leaders skyward, the top of the hemlock droops in a most self-deprecating manner. Its sprays of needles have a tendency to delicately droop in a similar way, often adorned with tiny cones. These hemlocks also tend to live a humble life for many years, living in the shadow of tall Douglas firs. Eventually some event may remove the dominant Douglas fir, giving the hemlock a chance to grow tall and flourish.
Hemlock History
Hemlocks originated in Asia around 30 million years ago. At one time, they were common throughout the Northern Hemisphere. Eight species remain, four in North America and four in eastern Asia. Two are native to the Pacific Northwest: western hemlock and mountain hemlock. One unexpected detail about hemlock relationships: The two species that are native to the east coast of the U.S. and Canada are more closely related to the hemlocks of Asia than to the Pacific Northwest natives. Appearance
Needles: The short, flat needles of western hemlock are variable, as suggested by its scientific name, heterophylla. While the needles tend to lie flat, they do so grudgingly, sometimes refusing to at all and growing helter skelter all around the twig, pointing in any direction. The needles also vary in length, but each needle consistently displays a dark green upper surface and two white bands on the lower surface.


Cones: Western hemlock cones confirm its humble reputation. The cones are less than an inch long with rounded, thin scales. On the other hand, the tree is a prolific producer of cones. You can often find them even on the lower branches. If you look closely in the spring, you may also find some tiny pollen cones hiding in the needles. The seed cones open in the fall and drop their seeds. Each seed has a small wing attached and can travel over a mile in a strong wind. Old cones often remain on the tree for another year. If you don’t see any cones on the tree, look on the ground. It is often covered with a layer of old cones.

Bark: The gray bark develops small furrows on large trees. Hemlock bark is thin and does not protect the tree from fire like the bark of Douglas fir.


Where it grows
Western hemlock is the state tree of Washington. It is common in the western parts of both Washington and Oregon, especially thriving in wet regions. It grows at lower elevations and up to 4000 feet, where it is replaced by mountain hemlock. Two adaptations enable western hemlock to thrive: It is shade tolerant and its seeds can germinate in organic material.


Unlike Douglas fir, which requires bare soil for its seeds to germinate, western hemlock seeds will germinate in soil with a thick organic cover. You will even see a young western hemlock growing on a rotting stump or log. You can recognize older trees that started on these "nurse logs" by the airborne roots that continue to straddle the absent nurse log long after it has rotted away.
Western hemlock is one of the most shade-tolerant trees in the Northwest. Once a seedling is established, it can survive for years, growing slowly in the shade of large Douglas firs. A Douglas fir cannot live forever, and it cannot reproduce in a dense forest with no bare soil where the seeds can germinate and not enough sunlight for them to grow. Eventually, the old Douglas firs will die and the western hemlock will have their place in the sun. Then they can grow faster than a Douglas fir. Given enough time, western hemlock always wins in any competition with Douglas fir. Then the hemlock forest can grow and regenerate in perpetuity until a catastrophic fire burns all the trees and creates conditions for a new generation of Douglas fir to grow.


Along the coast, western hemlock competes with Sitka spruce. While the spruce are dominant at lower elevations where they tolerate salt spray, as the elevation increases, so do the hemlock, often becoming a pure stand. You can see this transition clearly if you hike the trails above the Visitor Center at Cape Perpetua on the Oregon Coast.


A western hemlock can grow to 200 feet tall with trunks over 8 feet in diameter. After 300 years it stops growing taller, but can live another 200 years. The oldest is over 700 years old, located in the Queen Charlotte Islands.


UsesThe first inhabitants of the Pacific Northwest made many uses of western hemlock. The inner bark was a source of tannin, used in tanning hides. They used dye from the bark to color baskets and wool. They carved the wood into tools and spoons. The branches were used as bedding material, a good thing to remember if you are ever lost in the woods. Alaska natives made bread from the inner bark. Coastal tribes placed branches in tidal waters to collect herring eggs.


Today, western hemlock is an important timber species, used to make lumber and plywood. You will often find lumber at your local lumber yard that is sold as “Hem-Fir,” indicating that it is either hemlock or fir. The white, soft wood is easy to work with and stain to any color, which makes it an ideal choice for baseboards, door and window casings, and other mouldings. The pulp is used to make high-quality paper and is the source for making cellophane, rayon, and plastics. Western hemlock is a popular landscaping tree, both in its native range and in many locations around the world. David Douglas introduced western hemlock to Britain after he discovered it growing in the Pacific Northwest in 1826.
Many wildlife species depend on western hemlock for food or shelter. Deer and elk browse the needles. Snowshoe hare, rabbit and mountain beaver browse the seedlings. Deer mice and many species of small birds eat the seeds. Western hemlock provides habitat for the northern spotted owl, northern flying squirrel and red tree vole. Cavity-nesting birds also use the trees.