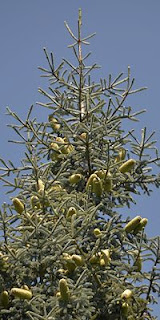 Noble fir is aptly named. It is a prince among the firs of the Northwest. Its bluish color, its distinctive geometric branching, and the well-groomed appearance of its needles contribute to its desirability as a landscaping tree and Christmas tree. The beauty of this tree inspired David Douglas to name it Abies nobilis when he found it growing in the Columbia Gorge in 1825. It's now called Abies procera. Procera comes from the Latin procerus, which means "tall." This, too, is a fitting name, since it is the tallest of the firs, sometimes growing to 260 feet. 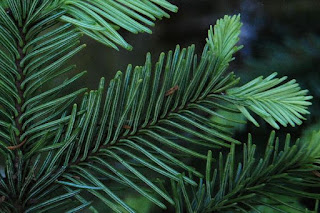 Needles: It's easy to identify noble fir by looking at the underside of a twig. The needles are shaped like hockey sticks with a distinctive curve where they attach to the twig, and sweep away uniformly, giving them a combed appearance. The needles are blue-green with two bands of white on each side, unique among the firs of northwest and . Grand fir and Pacific silver fir have white only on the lower side of the needles. Subalpine fir needles have two bands on the bottom and a single band on top. 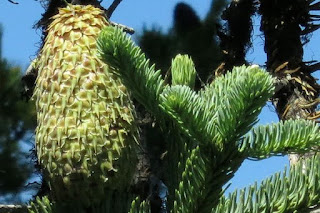 Cones: The cones sit upright on the branch near the tree top, like other firs. But noble fir cones have distinctive whiskery bracts that stick out beyond the scales. Since the cones fall apart at maturity, dispersing seeds and scales, you are not likely to find any intact cones under the tree. However, you may be able to find individual scales with their unique bracts still attached on the ground in the fall. The winged seeds can sail a distance twice the height of the tree, even more on a windy day.

Where it grows: Noble fir grows in the and the Cascades, mostly above 3000 feet, but occasionally down to 2000 feet elevation. Although they don’t usually grow in pure stands, you can find large numbers on near , and at the top of and Nesmith Point in the Columbia Gorge. You can find replanted noble fir in logged areas of the drainage. Noble fir loves sunlight and ample amounts of rain. It grows on steep mountain slopes and thrives in open, sunlit locations. It grows in the shaded understory better than Douglas fir, but is not as shade tolerant as grand fir or Pacific silver fir. Like Douglas fir, its seeds can germinate and grow on bare soils after disturbances like fire and logging.

In southwest , noble fir hybridizes with red fir. Although some sources list red fir as an Oregon native, Oregon Flora Project classifies those growing in southwest Oregon as hybrids (Abies magnifica x Abies procera), often called Shasta red fir. The bracts on red fir cones are hidden within the scales. As you travel south in the Oregon Cascades where the hybrids grow, the bracts appear shorter and shorter as they become more like those of red fir.

Uses: The wood is valued for lumber, because it is stronger than hemlock and the other true firs. It has been used to make ladders because it is strong and light. The British used it for the frames of their Mosquito airplanes in World War II. Since fir wood had little commercial value as lumber, noble fir was marketed as the more highly prized larch in the early twentieth century. This is why several peaks where noble firs grow are called , including one on each side of the Columbia River east of and one northwest of . You won’t find any larch anywhere near any of these peaks.

Noble fir is arguably the finest native Christmas tree in the Northwest, prized for its form, stiff branches, groomed needles, and bluish color. Someone told me recently that you can identify a noble fir on a Christmas tree lot by looking at the price tag. It will be the most expensive variety. Noble fir is often planted as an ornamental. It grows well at lower elevations in direct sunlight or partial shade.

Noble Fir in The Gymnosperm Database
Silvics of North America Volume 1: Conifers
Flora Project
Plants of the by Jim Pojar and Andy Mackinnon
Posted by Ken Denniston at 7:04 PM 2 comments:

Recently, the Eagle Creek fire in the Columbia Gorge burned over 48,000 acres. It was disheartening to see so many beautiful trees along familiar trails go up in flame. But it also has been an opportunity to reflect on the nature of forest fires and their effects on forest ecosystems. Here are some reflections. 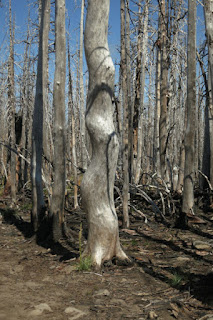 What does it mean? Now, let’s think about the consequences of recurring forest fires: If forest fires are a natural occurrence, then it should be no surprise that the forest has adapted to these fires. And this is just what has happened.   Trees have adapted to deal with fire in different ways. Some grow thick bark that protects them from fire. Others wait for a fire to release their seeds. These seeds are the key to generating a new forest.

Fire is necessary. Forests have not only adapted to tolerate fire. Fire is necessary to the healthy development of the forest. We often think of forests growing to their final mature state and living in perpetuity as old growth. We celebrate old growth as the ultimate state of a forest. We love the huge, mature trees and the diversity of life in a mature forest. However, such a forest is not sustainable. It may live in this mature state for hundreds of years, but eventually it will be altered by fire or some other disturbance. So it’s no surprise that some tree species not only tolerate fire, but depend on it. For example, Douglas fir needs bare earth created by a hot fire for its seeds to germinate. Trees that wait for fire to release their seeds also depend on fire. Many forest types depend on a large fire disturbance to regenerate.
Some trees depend on smaller fires to maintain the nature of the forest. For example, ponderosa pines have thick bark that resists fire. Not only do they survive frequent fires, but they depend on those fires to suppress competing vegetation. These fires are necessary to maintain the open pine forest. When we suppress the fires as we have done for over a century, competing shrubs and trees grow and provide so much fuel that, when a fire starts, it burns so hot that it kills even the large ponderosas. In the ponderosa pine forests and many other forest communities, fire suppression has actually caused larger and more destructive wild fires.

Forest ecologists now recognize that fire is a natural and necessary part of a forest ecosystem. So how should we think about the recent fire in the Columbia Gorge? It’s natural to think that our beautiful forests have been ruined. No one wants to hike through such a scorched and destroyed landscape. Well, we can take heart that not all the area the fire touched has been torched. And although some areas appear to be devastated now, they will regenerate. I saw this three years after the Dollar Lake fire on Mt. Hood. We can look forward to observing the same results in the Columbia Gorge. There is much we can learn about a forest when we see how it recovers from a fire.
Not all fires are natural. On the other hand, the Eagle Creek fire should give us pause. It is significant that this was not a natural fire. It was not caused by lightning. It was, rather, caused by teenagers setting off fireworks. So why is that important? First, the fire was started at the bottom of a canyon. This enabled the fire to quickly race up the steep slope of the canyon and spread from there. Lightning fires are more frequently started on ridge tops at higher elevations where the forest is thinner so the fire starts more slowly.
Fire and Global Warming. Now we are faced with another challenge to our forests that is also human caused: Climate warming is changing the behavior of these fires. Warmer temperatures have caused the forests to become increasingly dry in the hot summer. Snow is melting sooner, creating a longer fire season. Over the past 40 years wild fires have become more frequent and more destructive. Wildfires may be the biggest threat that our forests face in a changing climate.

What can we do? We can speak up in favor of forest practices based on recent research for managing forests as an ecosystem that naturally includes fire. This may include the use of controlled fires in some cases. We can point out that these fires are healthy for the forest and healthier for people who live nearby. And most of all, we can avoid starting fires in dry canyons that all too often become destructive wildfires.
_____________________

Sources and More Info.
Human-started wildfires expand the fire niche across the United States
How Will The Wildfires Of Today Fuel The Fires Of Tomorrow?
Western Wildfires and Climate Change
Eagle Creek Fire Soil Severity Map
After the Dollar Lake Fire