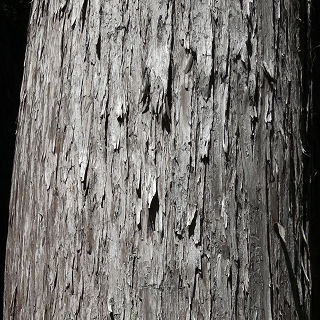 My first encounter with incense cedar wasn’t a sighting. It was a smelling… of trees in Yosemite Valley below Yosemite Falls. Walking through the trees there, I noticed the pleasant aroma and asked a ranger what it was. He told me I was smelling incense cedar. With such an overpowering aromatic presence, this tree is well-named. These aromatic qualities have contributed to its wide use in cedar chests and closets. Its resistance to decay makes it a good choice for siding and other outdoor uses.

You may not realize it, but you have most certainly used small amounts of incense cedar. It has been the preferred wood for making pencils for many years. However, planting incense cedar as an ornamental is surely more noble than its use in pencils. Its slow growth and beauty make it a preferred landscaping tree. Incense cedar displays bright pollen cones in the fall. You often see them on branchlets in Christmas wreaths.

Incense cedar has small, flat scale-like leaves forming overlapping, long, wedge-shaped joints. The leaves are often described as forming the shape of a wine glass, but beer drinkers would swear that they are shaped like a beer glass. This pattern, often outlined in white, is distinct to incense cedar. The foliage forms flat sprays that often have a vertical orientation, unlike western red cedar, which has drooping sprays with a horizontal orientation. 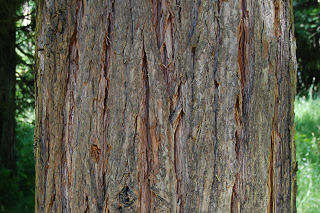 The reddish-brown bark looks similar to western red cedar, but it is deeply furrowed on large trees. The best way to identify incense cedar is by its unique cones if any are present. The differences that distinguish incense cedar leaves and bark from other cedars may be subtle, but incense cedar cones are unmistakably unique. They are shaped like a duck's bill, and when they mature, they open, looking like an open bill with its tongue sticking out.

Incense cedar is primarily a California tree, growing in the mountains throughout the length of the state. But some grow in the Oregon Cascades north to the south slopes of Mt. Hood. None are native to the Washington Cascades, at least, not yet. As the climate warms, they may be headed north. While our other cedars in the Pacific Northwest (western red cedar, Alaska cedar, and Port Orford cedar) favor wet areas, incense cedar tolerates dry conditions. It is moderately shade tolerant, but less so than our other native cedars. You can find incense cedar growing in the southern parts of the Mt. Hood National Forest. As you travel south in the Cascades, they become more common, also growing in the coastal mountains of southwest Oregon. If you want to see incense cedar in the Portland area, several were planted at Hoyt Arboretum along the connector trail between Bray Lane and the Redwood Trail. More are growing along the Marquam Trail, west of the Vietnam Memorial.

The scientific name of incense cedar is Calocedrus decurrens. Calocedrus means "beautiful cedar." Decurrens describes how the leaves extend down the stem. The English form of the word is "decurrent."