Four hobbits are riding their ponies on a shortcut through the Old Forest. But the Forest keeps hindering them, forcing them down, down into a valley where they rest by a river under a large willow tree. One hobbit, who is cooling his feet in the water, suddenly finds all of himself in the water. When another hobbit pulls him out, he says, “… the beastly tree threw me in! I felt it. The big root just twisted round and tipped me in.” The personification of trees is a theme that runs throughout The Lord of the Rings. Generally, personification runs through old myths, fables, and literature, especially fantasy. Anthropomorphism, attributing human intentions and characteristics to objects, is something we all do. I can’t tell you how many times a tree has stuck a root up and tripped me while hiking. We all understand that these attributions are not literal.

This kind of anthropomorphism also appears in nature writing. Some of this is innocent enough. It often adds some whimsy to the narrative and stimulates the imagination. Valerie Trouet does this in Tree Story, an engaging book on tree rings and what we can learn from them about climate, human history, and so much more. She talks about trees making wide rings when they are happy, but it’s clear that she doesn’t mean this literally.

On the other hand, some nature writers do take their anthropomorphism literally. This is when anthropomorphism runs amok. For example, a recent book has become a controversial example of this kind of writing. It is The Hidden Life of Trees: What They Feel, How They Communicate by Peter Wohlleben. Just the title is enough to tell you where we are headed in this book. Inside, he talks about trees sending messages to their neighbors, tasting the saliva of insects, and screaming when they are thirsty. He defends these anthropomorphisms by saying that he wants to get his readers to value trees and treat them appropriately as beings with emotional lives. Surely we can see the value of trees just for what they are. And we will value them even more when we understand more about them, how they evolved, how they fit in an ecological system, and how they actually function in that system. We can see them as things of wonder and beauty without imposing human emotions onto them. 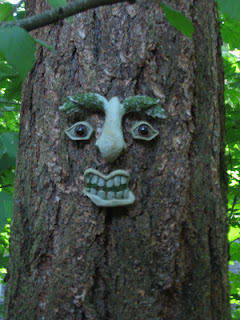 Suzanne Simard describes her study of the forests of British Columbia in her book, Finding the Mother Tree: Discovering the Wisdom of the Forest. She tells of her studies of the complex relationship between trees and other life in the forest, especially the symbiotic relationship between tree roots and a network of mycorrhizal fungi. The fungi connect to the tree roots and branch out to collect nutrients for the trees. In return the trees send sugars to the fungi. This fungal network can connect to multiple trees and enable the transfer of nutrients from one tree to another. Simard has conducted important experiments on these relationships, especially on the transfer of nutrients from what she calls “Mother trees” to seedlings. She characterizes the Mother trees as talking to other trees. When experiments show that seedlings from the Mother tree thrive better than other nearby, unrelated seedlings, she characterizes this as Mother trees nurturing their young and says that Mother trees ‘recognize’ their own young.

The research is groundbreaking and fascinating. But here I want to focus on the personification. Does it further our understanding? I argue that it does not. On the contrary, it distracts from our understanding. That is why I call it pernicious. When I read about research like this, I want to know why it is that the close relatives thrive more than the distant ones. What is the mechanism that allows them to do so? I suspect that it may be related to how the trees and the fungi evolved together. But when I’m told that the Mother tree recognizes her young, that tells me nothing about what the process might be. I can’t even make sense of that. But you say, “what about the evidence?” Let’s be clear: The evidence does not support the conclusion: It does not follow from that fact that the closely related seedlings thrive that the Mother tree recognizes them. This explanation is very simply not an explanation at all.

I suspect that there is something in the genetic makeup of the tree and the fungi that might favor genetically similar seedlings. That is something we would want to investigate and would explain why the genetically distant seedlings might not  thrive as well. However, when we don’t understand the behavior of trees, we may be inclined to think of some analogous human action and ascribe intention and intelligence to it. But our lack of knowledge of the process is not evidence for the claim that trees are intelligent or have intentions. Again, rather than explain, this Anthropomorphism misdirects us from our search for an explanation.

There are several lessons we can learn here:

First, beware of personifications given as explanations. They generally don’t explain.

Try to read personifications as innocent figures of speech. Sometimes they are.

Ask yourself: Does the personification lead you to consider an explanation? If not…

Be curious. Dig deeper, look for further explanations, or try to think of other possible explanations.

Oh, one more lesson: If you ever see a large willow tree by a river, do not sit under the tree and dangle your feet in the water!

Pitfalls of Anthropomorphism: The Hidden Life of Trees

Facts or Fairy Tales? Peter Wohlleben and the Hidden Life of Trees

How Trees Talk to Each Other, Suzanne Simard - TED Tallk video

Do Trees Talk to Each Other?

The Intelligent Plant - The New Yorker