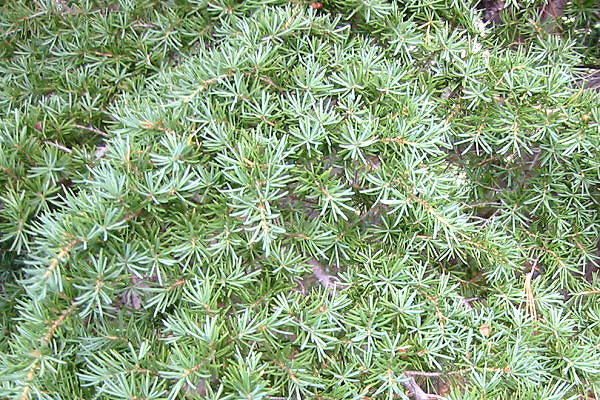 “My God. It’s full of stars.” This is what Dave Bowman exclaimed when he looked into the monolith orbiting Jupiter in the classic science fiction movie 2001: A Space Odyssey. If he had looked at a mountain hemlock, he might have said the same thing. The needles at the tips of the twigs often look like tiny stars with bright blue-white beams of needles radiating out from a point. The needles of other hemlocks tend to lie flat and have white stomatal bands only on the lower surface. 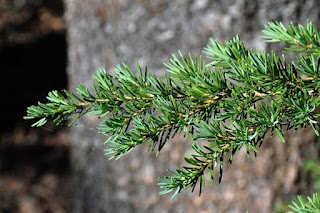 With complete disregard to any sense of order, the needles of mountain hemlock point in all directions. The needles are short like Western Hemlock, but they have white stomatal bands on both sides of the needle, often giving it a bluish color. The leader at the top of the tree curves and droops over like Western Hemlock. The cones of mountain hemlock are also distinctive. They are about two inches long, three times the size of other hemlocks. In fact, mountain hemlock is so different from other hemlocks that some botanists once thought that it was a hybrid between hemlock and spruce. 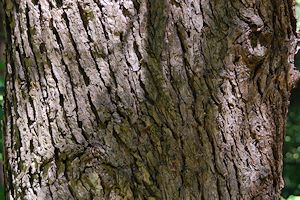 Tsuga Mertensiana is the scientific name of mountain hemlock. Tsuga is the Japanese name for hemlock.  The species name, mertensiana, comes from Karl H. Mertens, a German botanist, who first collected specimens in southeast Alaska while on a Russian expedition in 1827.

Mountain Hemlock grows in the higher elevations of the Cascades and Olympic Mountains, often at the timberline with subalpine fir and whitebark pine. Below the timberline, it sometimes grows in pure stands of large trees. However, at the timberline, it often remains a dwarf, creeping shrub, where winter snow flattens it to the ground. In these park-like settings, the hemlocks also grow in clumps, which contain one or more old, large trees and several young trees. The range of mountain hemlock extends into the High Sierras of California, where it grows at higher elevations, the northern Rocky Mountains, and along the coast of Alaska to Anchorage, where it grows down to sea level. 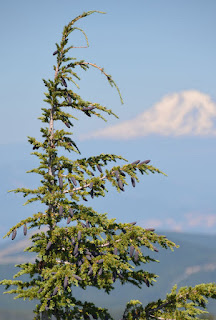 Mountain hemlock has little value as lumber. However, it is an important factor in watershed protection, a fact not lost on people in Portland, which gets its water from Bull Run Lake near Mt. Hood. The water from Bull Run is renowned for its purity, thanks to the mountain hemlock and other trees in the forest above the lake. We can also appreciate the scenic beauty of mountain hemlocks growing in and around grassy alpine meadows. You can see them at Paradise on the south slope of Mount Rainier, at Elk Meadows east of Mount Hood, in Jefferson Park on the north side of Mount Jefferson, and in the Three Sisters Wilderness. 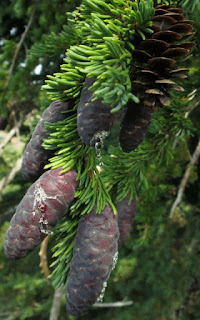 John Muir was impressed by the contrast between its delicate appearance and its ability to thrive in the harshest conditions, spending the long, cold winter at the timberline under many feet of snow. “No other of our alpine conifers so finely veils its strength. Its delicate branches yield to the mountains' gentlest breath; yet is it strong to meet the wildest onsets of the gale,—strong not in resistance, but compliance, bowing, snow-laden, to the ground, gracefully accepting burial month after month in the darkness beneath the heavy mantle of winter…. Thus warmly wrapped they await the summer resurrection. (The Mountains of California, Ch 8 “The Forests”) Curiously some observers have noted that mountain hemlocks may need the protection of all this snow. The roots may freeze in cold environments where there is little snowfall. Heavy snowfall can insulate these delicate roots. John Muir called the mountain hemlock “... ineffably beautiful, the very loveliest of all the American conifers.” (The Yosemite, Ch. 6) Mountain hemlock is one of my favorites, too. Look for them the next time you’re up in the mountains or shopping at a local nursery. 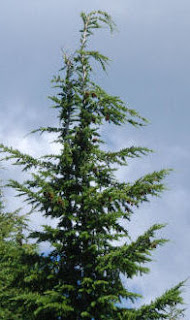 Hemlock trees are not the source of the poison hemlock that killed Socrates. They are not poisonous and not even related to poison hemlock, but the foliage looks similar, and crushed needles have a similar smell. This, no doubt, led European settlers of North America to call these trees hemlocks. The scientific name of the hemlock genus is Tsuga, which also has a curious origin. Rather than the usual Latin name, Tsuga is the Japanese name for Japanese hemlock. In the nineteenth century, hemlocks were first classified as a pine, then as a fir, and later as a spruce. After the discovery of Japanese hemlock, hemlocks were assigned to the genus Tsuga.

Hemlocks are in the pine family (scientific name: Pinaceae) and are unique in the family. They have a distinctive drooping leader at the top of the tree. Hemlocks also have the smallest cones in the pine family. They can tolerate growing in the shade of other large trees for years. However, hemlocks can grow to enormous size and eventually dominate other trees in the forest. Although they can grow in the shade of Douglas fir for hundreds of years, in the normal succession of a Douglas fir forest, the hemlocks will eventually prevail, forming the canopy of the mature forest.

At least nine species of hemlock grow in North America and Asia. Curiously, they are absent from Europe. Four species are native to North America, with two of them in the Pacific Northwest, western hemlock and mountain hemlock. They are important commercial trees, used to make lumber, plywood and pulp for paper. However, the beauty of their drooping form and delicate branchlets far exceeds their usefulness as lumber. And pulp? How degrading. Their purpose is better served by horticulturists, who have developed many popular cultivars.

Hemlock needles are short and usually flattened on the twig, but they have a tendency to deviate from their flattened position. The needles are dark on top with two white lines on the lower surface. The cones are usually less than an inch long, and the scales are thin and rounded. Mountain hemlock is an exception to these characteristics, with bluish needles that make no pretense about lying flat, surrounding the twig in all directions. Also, the cones are over achievers, being twice as large as other hemlock cones.

Hemlocks flourish in wet, cool environments. They can tolerate a heavy snowpack, not with strength, but by bending. They will spring back when the snow melts in the spring. On the other hand, one thing they do not tolerate is drought. Unless you live east of the Cascade Mountains, a hemlock would be a graceful addition to your yard, whether it is a cultivar or one of our natives.