Millions of years earlier, another migration crossed the Bering Land Bridge in the opposite direction. However, it wasn’t a migration of people. It was a migration of Douglas fir trees. The story of this migration starts in Mexico. The first Douglas fir originated in northern Mexico some 50 million years ago. Douglas fir is closely related to the larch, which evolved from the pines. Douglas fir either branched from the same pine ancestors or from the larch. In either case, the two took quite different forms, the larch becoming deciduous with bundles of needles, and Douglas fir growing evergreen needles that resemble those of the spruce and fir.

After its departure from the larch, Douglas fir began a long journey north, with some of them branching off to southern California to enjoy a warmer climate. They became a separate species we now know as bigcone Douglas fir (scientific name: Pseudotsuga macrocarpa). As both the scientific name and the common name imply, they have larger cones than the Douglas fir of the Pacific Northwest, although the trees are much smaller. Meanwhile, the trees that continued their migration north became what we know as Douglas fir (Pseudotsuga menziesii).

Now we must stop and face this question: How can trees migrate? Unlike the strange, magical trees that destroyed the Orcs in “Lord of the Rings,” trees in our world remain rooted in one spot their entire lives. Yes, but their winged seeds can travel! They are adapted to do just that. Let’s suppose that in 100 years a tree grows to be 100 feet tall and produces seeds that are blown a conservative 200 feet from the tree. Thus, the forest would move 200 feet in 100 years, or on average, 2 feet per year. At that rate, it would take about 2500 years for the trees to migrate one mile. It may seem impossible for this forest to migrate all the way to Oregon, until you consider that it had millions of years to complete the trip. At this rate of one mile every 2500 years, the offspring of these seemingly immovable trees could be growing in Portland in less than 3 million years. Not content to linger in Portland, they continued right up the Pacific Coast to Alaska and across the Bering Land Bridge and south into Asia

Before they migrated very far, they faced another difficulty that might have stopped them before they even made it to Portland. The problem is this: As they migrated farther north, the climate changed. With these changes in the climate, the trees must adapt to the new environment. Douglas fir adapted to many changing conditions in their journey north to Alaska and then south into Asia. The journey was not without its setbacks. For example, they encountered a changing climate and several ice ages. And they required the right conditions for their seeds to germinate and survive. Douglas fir seeds germinate best in a seed bed of bare soil. Finally, they may have been stopped by open ocean at the Bering Strait, but at least once the Bering Land Bridge formed and allowed them to cross into Asia.

As they moved south through eastern Asia, they adapted to the conditions in different locations, and developed into several new species, including one in Japan, one in Taiwan, and several in China:

Many other conifers have taken similar migrations from North America to Asia across the Bering Land Bridge including some of the true firs (Abies genus), spruce, and pines. And remember the ancient relatives of the Douglas fir, the larch? I suspect the larches took a similar journey, not only migrating to Asia, but to Europe as well. Here in North America, it appears that while migrating north, they also made a right turn and migrated to the East Coast and all across Canada. Some remained in central Alaska.

More recently and closer to home, Douglas fir has been adapting to different conditions here in western North America. Most notably, they have migrated north and south as well as up slope and down slope, with changes to the climate. Cold weather and glacial ice forced them south many times in the past thousands of years. When it warmed and the ice melted, they were able to migrate north again. Note that the glacial till left by the retreating glaciers was the ideal seed bed for the germination of Douglas fir seeds.

The Cascade Mountains have imposed an interesting split in the population of Douglas fir in the Pacific Northwest. As the saying goes in biology, “Absence makes the genes wander.”  Whenever the members of a species are separated by a barrier, they will develop genetic differences. And if the environment is different in the separate populations, we will be able to see these differences as they adapt to the different conditions.

As everyone from Oregon and Washington knows, the climate west of the Cascades is mild and damp, well in truth, wet. On the other hand, east of the Cascades, it is dry and prone to temperature extremes and drought. As the separate populations of Douglas fir adapted to these different environments, they evolved into two distinct varieties, and we can now see the differences between them: 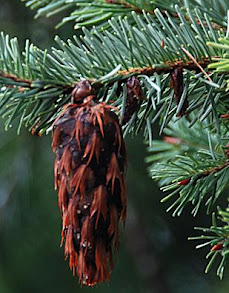 Coastal Douglas fir (Pseudotsuga menziesii var. menziesii) now grows in western Oregon and Washington from sea level up to 5000 feet. It also grows along the coast of British Columbia and in the coastal mountains and Sierras of California. This variety grows faster and taller but is less drought tolerant. The needles are green, and the bracts on the cones lie flat on the scales. 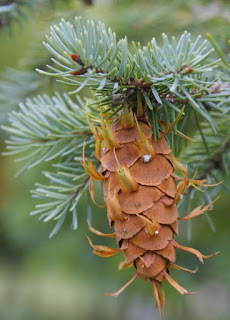 Rocky Mountain Douglas fir (Pseudotsuga menziesii var. glauca) grows between 2000 and 7000 feet from central Oregon to the northeast corners of Oregon and Washington, and up into Canada. It also grows throughout the Rocky Mountains up to elevations of 9700 feet, and up to 10,700 feet in Arizona and Mexico. The needles of this variety tend to be blue or gray compared to the coastal form. The bracts on the cones tend to protrude outward from the cones.

As the climate warms, we can expect Douglas fir to change as they try to adapt to new conditions. Or they may attempt to migrate to cooler locations, higher or northward. The problem they face is that the climate is changing quickly. Can the trees keep up? Trees do not adapt or move quickly. Some foresters and volunteers have tried to assist by planting seedlings in new locations where they can grow successfully. This may have some effect, but ultimately, we must stop doing the things that are causing climate change. Can we do that?

Intercontinental disjunctions between eastern Asia and western North America in vascular plants highlight the biogeographic importance of the Bering land bridge from late Cretaceous to Neogene by Jun Wen, Ze-Long Nie, and Stefanie M. Ickert-Bond. Journal of Systematics and Evolution 54:469–490.

See the following topics at The Gymnosperm Database by Chris Earl: