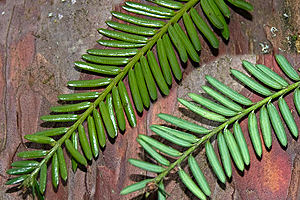 Pacific yew (Taxus brevifolia) is our native yew. Of all the conifers native to the Pacific Northwest, Pacific yew is a rare gem. Although lumbermen and loggers once maligned it as a saw-dulling trash wood, and botanists questioned its place in the community of conifers, it has played an important role in ancient and recent human history. It also has a distinctive place in the forest community and presents a unique opportunity for the alert hiker trying to take in the diversity of the forest. 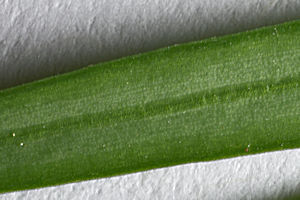 How to identify Pacific yew: Look for a small tree growing in the understory in the shade of larger Douglas fir of western hemlock. The needles are short, flat, and spread out on opposite sides of the twig in flattened rows like a grand fir or western hemlock. Like these trees, Pacific yew needles are dark green on top, but instead of showing bright white lines on the lower surface, they are just a lighter green below. The white lines or bands of stomatal bloom on the lower surface are often indistinct or not visible, but close inspection with a hand lens reveals several rows of stomata in each band.  The needles are about 1 inch long, shorter than grand fir needles, but generally longer than those of western hemlock. 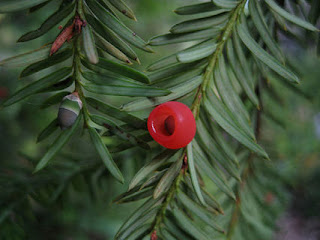 The most unusual feature of the yew genus is the structure of the cones. From all appearances, you might think that yews produce bright red berries instead of cones, a feature that has cast doubt on their status as a conifer. However, the berry-like fruit is a modified cone scale that develops into a small fleshy aril. Each aril partly encloses a single seed. Birds eat the arils and disperse the seeds. These seeds are quite poisonous to humans but pass through the bird’s digestive system with no apparent harm to bird or seed. Looking for the arils is not a dependable way to identify Pacific yew. The arils only appear in late summer. Also, pollen cones and arils do not usually grow on the same tree. Only the female trees produce arils, and then only if they are fortunate enough to be pollinated by a nearby male tree. 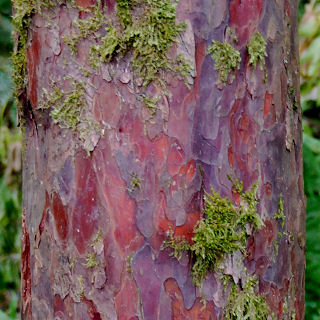 The bark of Pacific yew is also quite distinctive and, as it turns out, important. When not completely covered in moss, you can recognize Pacific yew by its bark, which is a patchwork of peeling papery brown or gray scales over a smooth inner layer that is purple or red-brown. On larger trees, the trunk becomes fluted.

The bark of Pacific yew was nearly its undoing. Scientists discovered a drug called Taxol in the bark, which proved to be an effective treatment for various cancers. The problem was that it required large amounts of yew bark to render a small amount of Taxol. Also, since the yews are not common, the supply of yew bark was quite limited. It became apparent very quickly that harvesting large amounts of Pacific yew bark was not sustainable. Fortunately for the Pacific yew, scientists soon discovered a way to synthesize Taxol from the needles of the English yew (Taxus baccata). This yew is a common cultivated shrub and easily regrows after trimming, making it ideal for hedges and topiaries. The clippings from yew hedges and other plantings provide a steady supply of yew material that can be used to manufacture Taxol. Even though Pacific yew is no longer used as a source for Taxol, it was key to the discovery of the drug.

Other uses: The wood of Pacific yew is exceptionally hard and strong. The first people to live in the Northwest used it for tools, canoe paddles and weapons, especially bows. They even used wedges made of yew to split cedar. The needles and bark of the yew also had various medicinal uses. Pacific yew has little commercial use today, but it is still used to make bows. 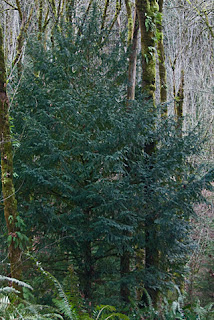 Where it grows: Pacific yew grows in moist, shady areas throughout the Northwest at elevations up to 5000 feet. It is not common, and when you find one, there may be no others growing nearby. It is usually under 35 feet high, growing in the shade of larger conifers, but can grow to 50 feet. It grows slowly, so a 35-foot tree may be over 100 years old. East of the Cascades, it often grows as a low shrub. Although it is not a common conifer, its rarity only enhances its appeal. If you are attentive when hiking the forests of the Northwest, you will find one growing here and there.

Names: Taxus is Latin for yew. Brevifolia is Latin for "short leaved," so named because its needles are shorter than those of English yew. Other common names: California yew, western yew, and mountain mahogany.

At one time all yews were considered to be subspecies of English yew. Now they are commonly classified as about seven different species. Besides English yew, which is native to Europe and sometimes called European yew, there are four species native to North America, and two native to Asia: Canada yew, Florida yew, Mexican yew, Pacific yew, Japanese yew, and Chinese yew.

Taxus brevifolia in The Gymnosperm Database

What is stomatal bloom?  And why do we care about it anyway?


The first question is easy. Stomatal bloom is a waxy white coating around stomata.  OK, but what are stomata? They are the tiny pores on conifer needles that enable them to breathe. That is, the stomata are openings used to exchange gases, taking in carbon dioxide and exhaling, as it were, oxygen and water vapor. Each stoma (pl. stomata) has two guard cells that control the size of the opening, like tiny lips. When it rains, the lips close to keep the water out of the internal part of the leaf. And the bloom? It aids in water proofing the needles, both keeping out rain water and helping to retain water when it is dry.

When you view the underside of the needles of a grand fir or western hemlock, you can clearly see two white lines of bloom on each needle. Each line or band of stomatal bloom contains several rows of stomata. You can see these individual rows with a good hand lens.

Now, why do we care about all this?  We can use the differences in the presence of stomatal bloom to help identify our native conifers. For example, you can distinguish Pacific yew from other native conifers by looking at the lower surface of the needles. The needles on grand fir and western hemlock have two bands of stomatal bloom on the lower surface, but the yew has no distinct bands of bloom. The lower surfaces of yew needles just appear to be a lighter shade of green.  That’s not to say that there is no stomatal bloom on Pacific yew  needles. It’s just that the color is muted compared to the striking white color found on grand fir and western hemlock.

It is often difficult to distinguish firs found near the timberline in the Cascades. Pacific silver fir and subalpine fir look similar. Both have stomatal bloom on the lower surface of their needles. However, if you look carefully at the needles of subalpine fir, you will see that they also have bloom on the upper surface. On the other hand, the upper surfaces of silver fir needles are dark green.

Stomatal bloom sometimes appears in different patterns. The bloom on the lower surface of western red cedar leaves resembles the shape of a butterfly, while the bloom on Port Orford cedar leaves forms an x-shaped pattern.


Shade-tolerant conifers in the Pacific Northwest usually have bloom only on the lower surfaces of the needles. This is particularly noticeable in the firs and hemlocks. Natives with bloom on the lower and upper surfaces are generally more intolerant of shade, and often grow in the higher elevations. This seems reasonable. The bloom on the upper surfaces would block the sun. Shade-tolerant trees need to have clear upper surfaces to capture what sunlight they can under the forest canopy. On the other hand, the bloom on the upper surface of needles gives trees growing in direct sunlight protection from the sun’s ultra-violet rays, especially in higher elevations where sunlight is more intense. This may explain why you find subalpine firs growing in open meadows near the timberline, while Pacific silver firs compete better in shady woods.

These relationships between stomatal bloom and the distribution of conifers are bound to be complex. In any case, some familiarity of the differences in the presence of stomatal bloom on conifer needles can help us identify conifer species in the wild.
________________
See also

THE RELATIONSHIP OF CUTICLE STRUCTURE TO THE VISIBLE AND ULTRAVIOLET SPECTRAL PROPERTIES OF NEEDLES FROM FOUR CONIFEROUS SPECIES by JOHN B. CLARK AND GEOFFREY R. LISTER in Plant Physiol. Vol. 55, 1975, p. 307
http://www.plantphysiol.org/content/55/2/407.full.pdf