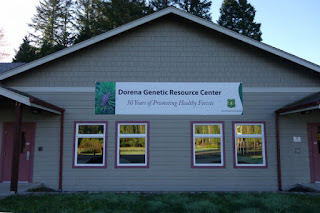 In October, Martin Nicholson, Curator at Hoyt Arboretum, took a group of us on a day trip to the Dorena Genetic Resource Center a few miles south of Eugene. The Dorena Center is a US Forest Service facility that does genetic research to find disease resistant conifers, focusing on white pine and Port Orford cedar. Seedlings grown at the Center are planted in seed orchards to produce large numbers of seeds, which can be used for reforestation and restoration. We met Richard Sniezko (Center Geneticist and Acting Manager), who gave us a tour of the facility at Dorena and the BLM's Tyrrell Seed Orchard, located southwest of Eugene in the Coast Range.

To begin research on finding resistant pines, researchers gather seeds from various locations and grow seedlings. To expose the seedlings to the white pine blister rust, researchers gather infected leaves of shrubs like currants and gooseberries. The rust requires two host species to complete its life cycle. One is a species of white pine. The other can be a variety of plants, locally, usually shrubs like currants and gooseberries. The infected shrubs infect the trees, and the trees in turn infect more shrubs. The seedlings at Dorena are infected or "inoculated," as Richard Sniezko put it, by placing them in a large room under a screen that holds the infected leaves of the shrubs. Artificial fog is piped into the room, where water collects on the leaves and drips onto the white pine seedlings, carrying the rust spores with it.

The inoculated seedlings now can be grown to see which ones are rust resistant. Genetically similar seedlings (called a family) are arrayed in a row, with other families in other rows. After a few years, the differences between families is striking, with some surviving and others completely dead.

Once rust-resistant specimens are identified, they can be grown for seed to be used for restoration and reforestation. To meet the demand for seed, resistant trees are grown at the Tyrrell Seed Orchard, and other seed orchards in the Pacific Northwest.


Note that the center develops diverse families of resistant seed.  This is important for two reasons: (1) It enables foresters to restore the new seedlings to habitats to which they are adapted. This enhances their ability to thrive in that environment. (2) It maintains genetic diversity among the planted trees. This enables them to adapt more readily to future changes and survive other diseases.

It is noteworthy that most of the whitebark pine in the Northwest is located in wilderness. The legal definition of wilderness in the 1964 Wilderness Act expresses the idea that wilderness is to be a place where natural processes are allowed to run their course without human interference. This would seem to preclude planting resistant pines in wilderness. However, in the case of white pine blister rust, it has been human interference that introduced the pathogen into the wilderness. US Forest Service regulations now allow forest restoration in wilderness when we can't reasonably expect that the forest can recover naturally. However, in some cases, it makes sense to leave recovery to natural processes and learn from what happens naturally.

The Dorena Genetic Resource Center also works with Oregon State University to research and grow Port Orford cedar (Chamaecyparis lawsoniana) that is resistant to cedar root disease. This pathogen (Phytophthora lateralis) is an introduced fungus-like water mold that is related to brown algae. It was first reported in the United States on ornamental Port Orford cedar seedlings near Seattle in 1923. By 1952, it had spread to the natural range of Port Orford cedar near Coos Bay, Oregon. Since then, it has spread throughout the range of Port Orford cedar in southwest Oregon and northern California, killing large numbers of trees. It has also attacked cultivars of Port Orford Cedar, adversely affecting the horticulture industry.  It also can kill Pacific yew (Taxus brevifolia) growing near infected cedars. Western red cedar (Thuja plicata) is resistant to the disease but can be infected.


Researchers have located Port Orford cedars growing in the wild that are apparently resistant to cedar root disease and have used these for a program to grow seeds of resistant trees. One approach is to grow small trees for seed in a greenhouse at the Center. The trees are treated with gibberellic acid, a hormone that stimulates them to produce cones at an early age. This quickly provides seeds to grow resistant seedlings.


Diverse plantings of Port Orford cedars are also growing at the Tyrrell Seed Orchard to provide resistant seed for planting. As with the pines, it is important to maintain genetic diversity in forest habitats and to plant new seedlings in habitats to which they are adapted.


One possible monkey wrench in the program of developing disease resistant trees is that the pathogens that attack them can also undergo genetic changes so that they are lethal to the resistant trees. This could mean job security for geneticists fighting the diseases. It's likely to be a continuing battle.

Posted by Ken Denniston at 4:45 PM No comments:

A recent trip to the Oregon Garden was a great opportunity to see a great variety of conifer cultivars. Many of the conifers you find in landscaping are cultivars of naturally growing species. What is a cultivar? "Cultivar" is a short version of "cultivated variety." It is a plant selected for some set of desirable characteristics, often a result of careful breeding to accentuate those characteristics. Most garden plants and food crops are cultivars.

There are only about 600 species of naturally growing conifers. However conifer cultivars number in the thousands. The Encyclopedia of Conifers describes over 8000 cultivars. The authors note that there may be over 15,000 conifer cultivars now.
Cultivar names: The formal names of cultivars are formed by adding a special name to the Latin name of the species. These names can be in any language and are enclosed in single quotations marks, for example: Picea glauca 'Pendula', a cultivar of white spruce. Cultivars often have common names as well, in this case, weeping white spruce.

Variability: Cultivars can look entirely different from their parent species. Like the variety of dogs "cultivated" from the wolf, there may be hundreds of different cultivars developed from a single species of conifer. Over 450 have been produced from one Oregon native: Port Orford cedar (Chamaecyparis lawsoniana). Western red cedar has produced over 40 cultivars.

Origin: Many cultivars originated from naturally occurring genetic variations in a species or from genetic mutations. Others are produced by bud mutations on a normal tree. These can result in color change, different growth patterns, or dwarfing. Bud mutations often produce witches' brooms, a reduced growth form that creates a mass of short branches that often look like a dense bush growing high in a tree.

Cultivars are often reproduced by cloning, for example by growing cuttings taken from a twig. Some are reproduced from seeds, but normal reproduction introduces genetic variability that is often difficult to control.

Features: Conifers often grow to be large trees, not suitable to a small landscaped yard or garden. Many conifer cultivars are dwarfs compared to their parent species. They have been selected because they grow slowly and remain a reasonable small size for years. Many are selected for their unusual color, often showing blue or variegated leaves. Some show unusual growth patterns that people find attractive. A favorite feature is stringy, drooping branches. These cultivars are often named 'Pendula' or 'Weeping'.

One of the best places to see conifer cultivars is at the Oregon Garden. The Conifer Garden there features an extraordinary variety of cultivars that are beautifully landscaped and maintained. Fall and winter is a great time to visit. The conifers look about the same as in spring and summer, and you will avoid the crowds of people.