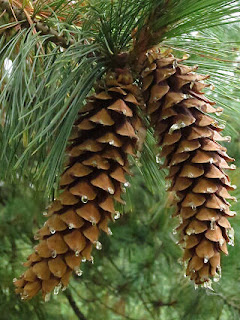 Western white pine doesn’t have the charm and stature of ponderosa pine with its golden bark and lofty height, but this white pine does have many subtle, attractive qualities. It grows straight and tall when given a chance, sometimes to a height of nearly 200 feet. The needles grow in bundles of five and have a blue-green color. The cones have a distinctive banana shape and are longer than any other Northwestern conifer except sugar pine cones. The gray bark breaks into rectangular plates on large trees. Another distinctive feature is the sticky resin on the cone scales. You will often see cones on the ground under a western white pine, and if you pick one up, don’t be surprised if you have sticky fingers. You were warned.

The scientific name of western white pine is Pinus monticola, named by David Douglas after he found it growing on Mount St. Helens. The species name is Latin for “mountain dweller,” and that is where you can find it, growing throughout the mountains of the Pacific Northwest. It grows in the Cascades and in the Coast Range at elevations of 3000 to 5000 feet. In Washington and British Columbia, it grows right down to sea level. It also grows in northeast corners of Oregon and Washington, and in northern Idaho. It is the state tree of Idaho, where it’s sometimes called “Idaho pine.” In California, it grows in the Siskiyous and Sierras.

You may be surprised to find western white pines growing in the Coast Range of Oregon, but you can find some in the higher elevations. Some young ones grow in the Tillamook Forest near the top of the Storey Burn Trail, west of Storey Burn Road. In Portland, you can see several large western white pines at Hoyt Arboretum. They are growing along the Bristlecone Pine Trail. They are easy to identify by the labels on the trees and the banana-shaped cones on the ground. Again, don’t pick them up if you don’t want sticky fingers. 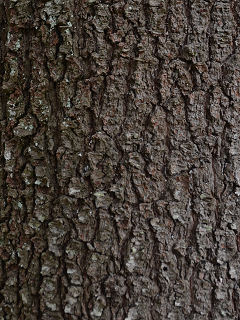 Western white pine wood is described as nonresinous — no surprise, since it seems to send all that sticky resin to the cones. The wood is soft, straight and stable in character, which make it desirable for making moldings and window and door frames. The wood is light, attractive, and easy to work, making it ideal for wood carving. In the past, it was the primary source of match sticks.

There appear to be few genetic differences between western white pines in different locations in the Pacific Northwest. So you can collect seeds from one habitat or elevation and successfully grow them elsewhere. The trees can readily adapt to different growing conditions. However, California populations do seem to be genetically distinct from those in the Northwest. The California trees are more resistant to white pine blister rust.

Posted by Ken Denniston at 9:03 PM