Walking in the conifer forests of the Pacific Northwest is always a visual feast, with so many tall, awe-inspiring trees and an enchanting understory of diverse shrubs and wildflowers. However, you will miss a wonderful part of the experience unless you are quiet and listen. You can hear a chorus of various bird calls and songs. However, one of the most intriguing calls is not from a bird at all. It is the melodic call of the Douglas squirrel. 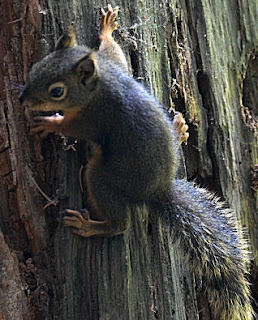 The most frequent Douglas squirrel call is similar to the call of a flicker. It is a short burst of high frequency that quickly drops in frequency and volume: “Chee-you.” This call is a warning that a predator is nearby. Maybe the squirrel has spotted you. When really excited, it gives a rapid sequence of just “chee chee chee chee” sounds. The other sound you will often hear is a long, continuous “cheecheecheecheechee.” This is the Douglas squirrel’s intruder alert. These squirrels are territorial and will defend the area around their nest and food cache. Perhaps it doesn’t have a large vocabulary, but this string of loud squirrel profanity would give any intruder pause. If you surprise a Douglas squirrel on the ground, it may make an excited combination of variable sounds as it scampers up a tree. You can hear the different sounds here.

Other sounds to listen for: The scurrying of little squirrel feet scampering up a tree trunk. Also, if you hear the sound of cones hitting the ground, chances are, there is a Douglas squirrel dropping them from the top of a nearby tree. 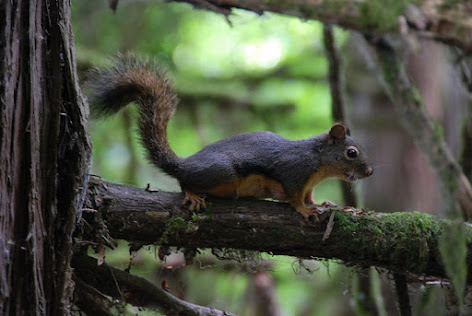 The Douglas squirrel is a small squirrel native to the conifer forests of the Pacific Northwest. In summer, it is brown on top and orange underneath with a dark stripe on the side between the top and bottom colors. In winter, the top is darker, and the color below turns light gray. The dark stripe on the side fades in winter. The Douglas squirrel is about 12 inches long, including its bushy tail, much smaller than the western gray squirrel, and somewhat smaller than the two non-native squirrels often seen in urban areas: the eastern gray squirrel and the fox squirrel. 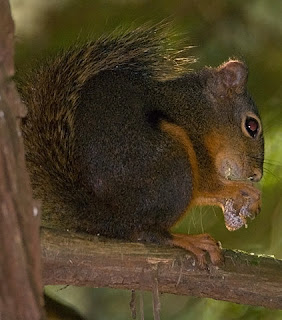 What the Douglas squirrel lacks in size, it makes up in energy and personality. It races up and down trees, takes flying leaps from branch to branch and tree to tree. Even when it is still, it appears and sounds like a concentration of suppressed energy, calling and flicking its tail. It is these birdlike calls that distinguishes the Douglas squirrel from the larger squirrels. Their calls sound like the unremarkable bark of a tiny dog.

The favorite game of the Douglas squirrel is the chase. Juveniles start playing this game as soon as they can be out of the nest, chasing each other up, down and around tree trunks, leaping from branch to branch. It is good training for the adult chase, which takes two forms. One is the intruder chase, which starts when an intruder ignores the loud intruder call. The other is when a female leads a male on a mating chase.

… threads the tasseled branches of the pines, stirring their needles like a rustling breeze; now shooting across openings in arrowy lines; now launching in curves, glinting deftly from side to side in sudden zigzags, and swirling in giddy loops and spirals around the knotty trunks; getting into what seem to be the most impossible situations without sense of danger; now on his haunches, now on his head; yet ever graceful, and punctuating his most irrepressible outbursts of energy with little dots and dashes of perfect repose. He is, without exception, the wildest animal I ever saw….

Douglas squirrels like mature forests with cone bearing conifers. The seeds inside the cones are their primary food. A squirrel will get a cone, sit on a branch, deftly strip the scales, and eat the seeds inside. In about two minutes, the squirrel will be finished and drop the stripped cone core. The squirrels often have a favorite spot for stripping cones, creating a large mound or midden of cone scales below. Look for the tiny “cone cobs” in the midden. 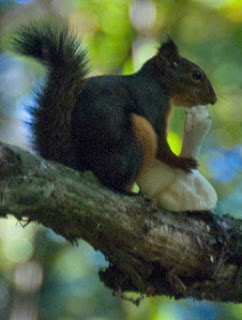 Douglas squirrels also eat fungi, and the seeds from maples and other broadleaf trees. In the spring they feast on the tender new growth from a great number of trees, including flowers, pollen cones, and conifer needles.

Douglas squirrels do not hibernate. They must store food for winter. When they drop cones on the ground, they will come down and carry them off to a hidden cache, usually under a log or some other damp place. They do this in late summer or fall after the cones are mature, but before they open and disperse the seeds. Timing is critical. They must wait until the seeds inside are fully developed. And storing cones with no seeds is, well, just pointless. 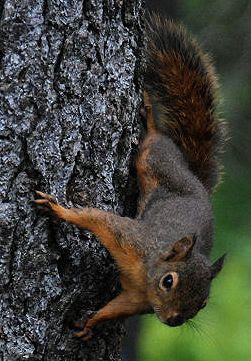 The scientific name of the Douglas squirrel is Tamiasciurus douglasii, both named after David Douglas. It is native to the forests of western Washington and Oregon. It also lives in southwest British Columbia and northern California. Its cousin, the American red squirrel (Tamiasciurus hudsonicus) is widely distributed across the rest of North America wherever conifer forests grow, including eastern Washington and northeast Oregon. Both species are sometimes called pine squirrels or chickarees. Although the range of the two species does not overlap, curiously, the red squirrel lives on Vancouver Island, while the Douglas squirrel populates the coast of mainland British Columbia.

Be sure to listen for these squirrels when you are hiking in the woods. If you hear one high in a tree overhead, sit down and wait. It may come down for a closer look, and possibly give you a sharp burst of squirrel profanity for invading its space.

Posted by Ken Denniston at 8:04 AM