What is a conifer? A dictionary will tell you the obvious: A conifer is a tree or shrub bearing cones. There are always exceptions, but this definition will work in most cases. Conifers are easy to identify, but so many conifers look alike that it is often difficult to identify the different species. The cones can be a useful way to identify each species. Many conifers drop their cones on the ground after dispersing the seeds. Some keep them on the tree for an extended time. 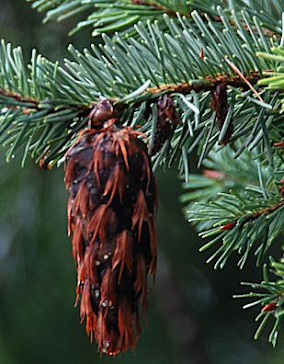 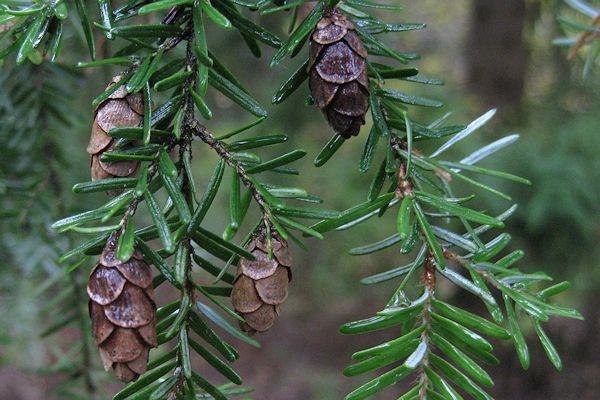 Western hemlock
Noble firs grow above 2000 feet elevation. The firs don't drop their cones after they disperse their seeds. They drop the scales and seeds at the same time. So you're not likely to see fir cones on the ground. However, you may see the scales on the ground in the fall. You can distinguish noble fir from other firs by the protruding bracts on the noble fir cone scales. Other firs have shorter bracts.

Millions of years before flowering plants started growing tempting fruits to entice animals to distribute their seeds, conifers developed the same ability by growing succulent cones. For example, the scales on juniper cones merge to form a fleshy berry-like cone that attracts birds. Many bird species happily eat the berries and distribute the seeds of the juniper. Millions and millions of years later one animal species disrupted this cooperative system by using these juniper "berries" to flavor gin.

Like juniper cones, Pacific yew cones don't look like cones at all. They have a single seed surrounded by a single sweet, fleshy scale. Also like juniper cones, birds distribute the seeds. Yew cones are usually called arils.
Not a cone? Alder cones do look like tiny cones, but they are not conifers.
Not a cone. This is what happens when tiny aphid-like insects (adelgids) attack new growth on a Sitka spruce